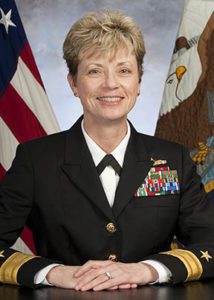 Phillips served nearly 31 years on active duty prior to becoming the Special Assistant to the Virginia Governor for Coastal Adaptation and Protection. In that role, she coordinated with federal, state and local partners to create equitable strategies to deal with rising waters and climate impact to critical coastal infrastructure assets within the commonwealth.

She received her commission through the Naval Reserve Officers Training Corps upon graduation from the University of North Carolina in 1983. She served aboard two vessels – the USS Cape Cod and the USS San Jose – during Operations Desert Shield/Desert Storm. She was the first commanding officer aboard the USS Mustin.

As the executive assistant to the 6th Fleet Commander, Phillips was involved in the deployment of goods in support of the Pakistani earthquake relief efforts. Prior to her retirement, she was commander of Expeditionary Strike Group Two, which included 14 vessels and 10 subordinate commands – all part of the Amphibious Expeditionary Forces along the U.S. East Coast.