A committee of rank-and-file members recently released its official report on the voting for national officers of the Seafarers International Union’s Atlantic, Gulf, Lakes and Inland Waters. Voting took place Nov. 1 through Dec. 31, 2020.

The union’s tallying committee consisted of 20 Seafarers (two members elected from each of the SIU’s 10 constitutional halls). The group certified the reelections of Michael Sacco as president of the SIU; Augie Tellez as the union’s executive vice president; David Heindel as secretary treasurer; and George Tricker as vice president of contracts and contract enforcement, among other results. 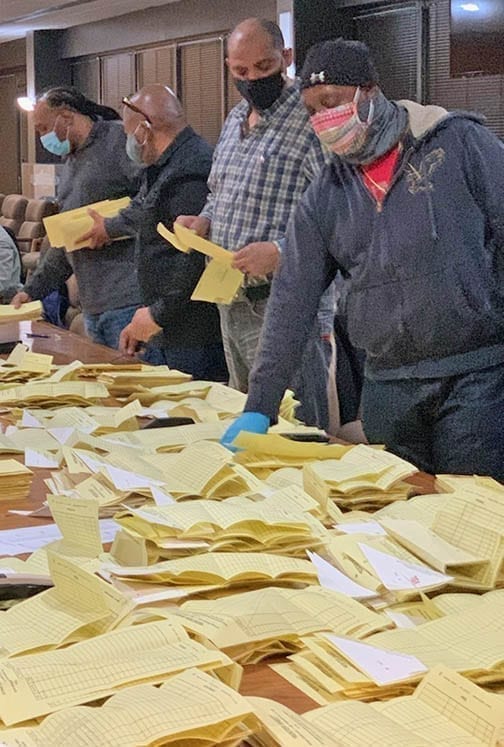 The tallying committee’s report will be submitted for approval by the membership at union meetings in March.

According to the report, the two contested races for office were decided by large margins. The committee disclosed the election of the following officers, who will serve four-year terms:

The committee met with the union’s secretary-treasurer to receive instructions following the Piney Point, Maryland, membership meeting on Jan. 4 and concluded both their tallying and report by the evening of January 7. They met during that week at the union’s headquarters in Camp Springs, Maryland, and at the SIU-affiliated school in Piney Point.

Unanimously approved by the committee, the report consists of more than 5,800 words. It reflects a strong rank-and-file turnout for balloting. The committee members concluded that they “wish to express [our] deep appreciation for the cooperation and assistance given to us by the union’s legal department and its technical and clerical staff. Finally, the members of the union tallying committee wish to congratulate the elected officers and jobholders. We extend our best wishes for the next four years. We hope that you will carry on the tradition of our union and advance the strength of the maritime industry.”

In light of the COVID-19 global pandemic, extra precautions were taken not only before and during the election itself, but also throughout the committee’s work. All committee members were required to test negative for the novel coronavirus, and they also had to isolate before travelling to Piney Point. Additionally, two alternates from each constitutional port also were chosen by fellow members during special meetings Dec. 28 (none ultimately were needed to fill in).