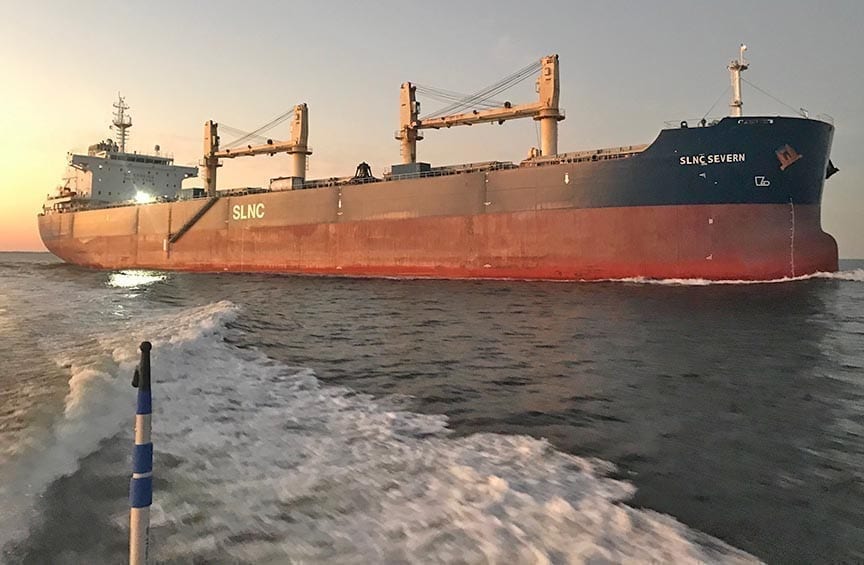 The new year brings new jobs for SIU members following the recent reflagging of the bulk carrier SLNC Severn, an outright addition to the union-contracted fleet.

Built in 2017, the vessel initially will provide regular service between the U.S. East Coast and the South Atlantic. The ship is 623 feet long, is equipped with four cranes and has the ability to carry a combination of containerized, breakbulk and bulk cargo. It has a sailing speed of 14.5 knots and reflagged under the Stars and Stripes in early December in Florida.

From aboard the vessel, Loria on Jan. 6 said, “It’s hard work reflagging a vessel, but everything is good. For the first few weeks, you work with whatever you’ve got. You have to order everything: tools, parts, miscellaneous. It’s a learning experience for a lot of us, and everyone is in good spirits.”

SIU Vice President Contracts George Tricker stated, “The company’s commitment to American-flag shipping, both in the Jones Act trade and internationally, is underscored by this reflagging, as is their faith in SIU crews. We welcome these new employment opportunities and, as always, I am 100 percent confident that SIU members will come through with their typically outstanding professionalism aboard the vessel.”

Russell Paret, CEO of Schuyler Line Navigation Company, stated, “We are proud to add the SLNC Severn to our U.S.-flag fleet. The SLNC Severn’s crew, our shoreside team and all the regulatory agencies worked together seamlessly to efficiently reflag the vessel, even in the midst of a pandemic. We offer a warm welcome to our newest crew members and are grateful to all of our mariners around the world for their commitment during this uncertain time.”

Formerly named the Frederike Oldendorff, the SLNC Severn was constructed in China.