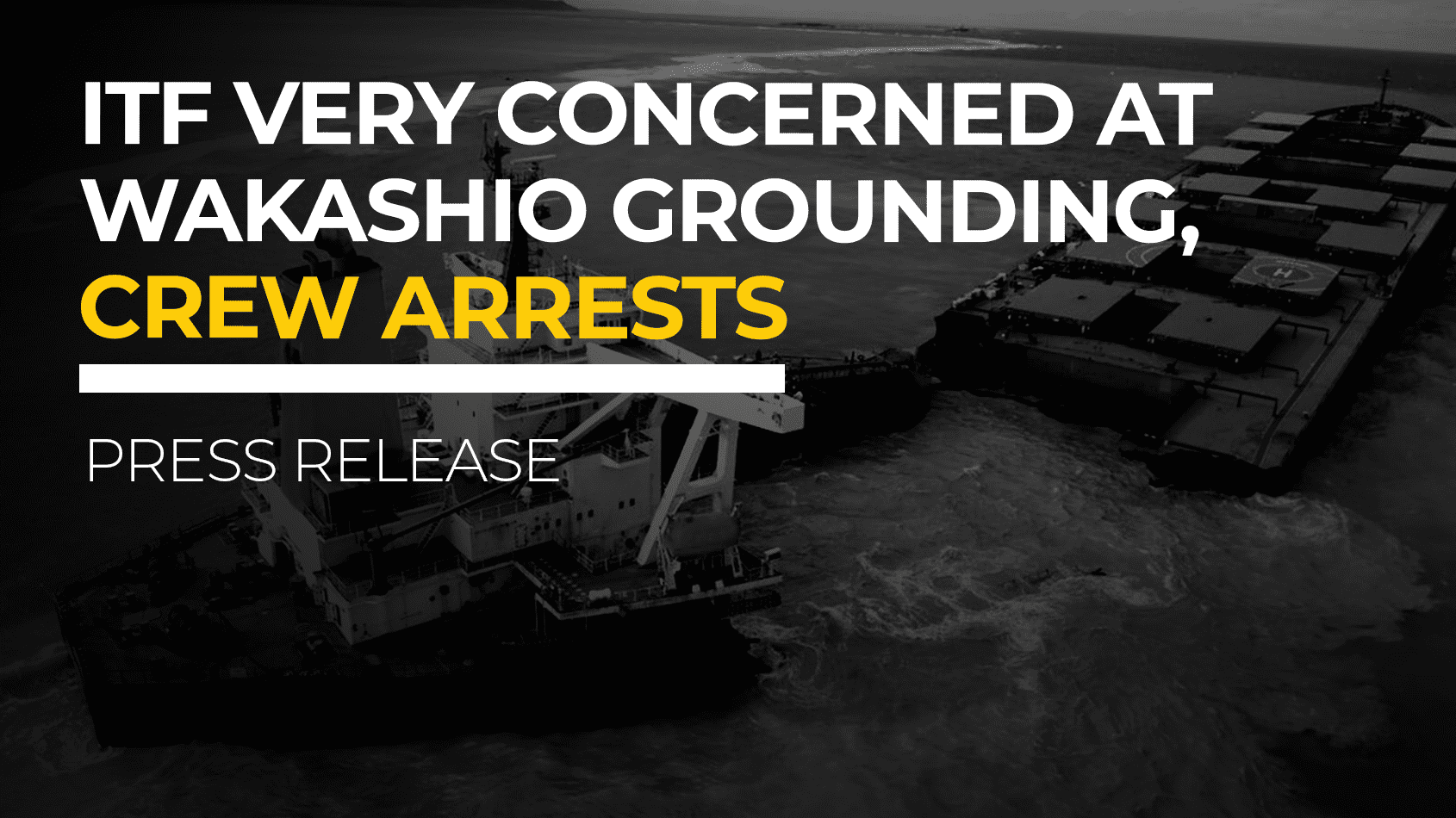 The International Transport Workers’ Federation, to which the SIU is affiliated, has issued the following news item. ITF Seafarers’ Section Chairman David Heindel, quoted throughout the release, also serves as secretary-treasurer of the SIU.

The release is available on the ITF website HERE

The International Transport Workers’ Federation (ITF), which represents 1.4 million seafarers, has today expressed growing concern at the Wakashio grounding situation and for the welfare of its crew.

The Japanese-owned ship beached along the Mauritius coast last week, and has begun to break apart, with oil now risking the pristine maritime environment.

Chair of the ITF’s Seafarers’ Section, David Heindel, said authorities and the public should not rush to blame the crew, but instead a proper investigation was needed, to take full account of contributing factors, including allegations that the ship had crew who were working beyond legal maximums.

“Whilst we await the outcome of the investigation, it is disturbing to read news of allegations that the crew of the Wakashio is responsible for the incident,” he said. “We are concerned at the arrest of the master of the Wakashio, Captain Sunil Kumar Nandeshwar, by the Mauritius authorities. And in recent days we have also heard of the possible arrest of the chief officer.”

Heindel continued, “Like the rest of the global community, we are worried for the marine environment of Mauritius, and its fragile ecosystem, currently under threat by advancing oil. But anger for this tragedy is better directed at the factors which lead to such incidents, rather than the people who happen to be in the hotseat at the time the accident occurs. It has been reported that most of the crew on the Wakashio were kept on board beyond their normal contractual terms. While it would be premature to speculate on the findings of ongoing investigations, it is appropriate to remember that during the present crew change crisis, we have warned of the threat to human life, property and the environment from an increasingly tired and fatigued global seafaring workforce.”

He added, “Due to travel and transit restrictions introduced to combat the spread of Covid-19, the world’s governments have made it difficult, and often times almost impossible, for seafarers to get off ships and be relieved by fresh crew. We find it disturbing that many of the same governments which are rushing to condemn our industry for this incident, are often the same governments which have turned a blind eye to the humanitarian disaster which may very well have caused this event in the first place. Governments cannot have it both ways: if they are concerned about the accidents which may result from a tired and fatigued workforce, then they must be concerned about getting those seafarers off and replaced with a fresh crew.

“The ITF, our affiliated seafaring unions, and employers in the industry, have all been pushing hard since February to educate governments on this escalating crisis,” he continued. “Stakeholders within the maritime industry, the UN specialist agencies and the UN itself have warned the global community of the risks faced by ships whose sea worthiness certificates are extended and fatigued seafarers unable to be replaced. Detailed protocols have been developed to facilitate safe and secure crew changes, but even today only a handful of countries have taken leadership in providing safe passage to allow crew changes.

“Most of the world’s governments have left hundreds of thousands of seafarers trapped aboard ships around the world for months because they refused them to return home when their employment agreements ended, in spite of the companies which employ them offering to organise very expensive charter flights for repatriation. The Republic of Mauritius is one such government which has refused to allow planes to land bringing even their own citizens home. When will they be held responsible for that?

“Far too many governments have dragged their feet, attempted to shift blame to others, and have actively frustrated attempts by the industry to get seafarers to and from ships.

“The tragedy of the Wakashio, its crew and the Mauritian people and environment is a reminder to us all of what can happen when tired and fatigued humans are expected to keep working indefinitely. It is not sustainable nor acceptable to have seafarers continue working to the detriment of their health and mental wellbeing: mistakes will happen. Accidents like this will happen!”

Heindel concluded, “It’s time for nations who rely on maritime trade; who value their marine environments; who cynically benefit from being a flag state but show no leadership when it counts: stand up. Do something. Or there is oil and blood on your hands, too.”