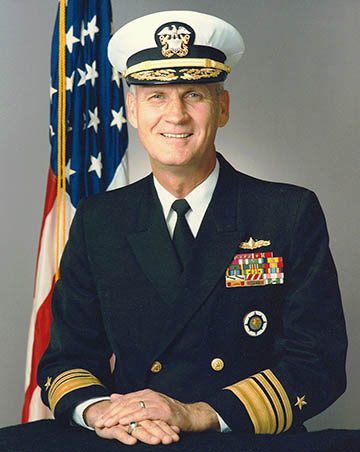 From the Maritime Trades Department, to which the SIU is affiliated:

“Admiral Herberger was more than a friend,” recalled MTD/SIU President Michael Sacco. “He was a merchant mariner. He was a Navy man. He understood logistics and transportation. He knew us.”

Following a 32-year career in the Navy, Herberger served as the U.S. Maritime Administrator from 1993 to 1997. During that time, he was the point man for the Clinton administration to secure passage of the “maritime revitalization” program.

Proposed in 1992 by the George H.W. Bush administration to rebuild and refortify the U.S.-flag merchant fleet in the wake of the 1991 Kuwaiti war, maritime revitalization finally passed the Congress and was signed into law by President Clinton in 1996 as the still-operating (and highly successful) Maritime Security Program.

Herberger was a regular presence at MTD functions, speaking at the department’s 1995 convention as well as at the 1994 and 1995 Executive Board meetings. The New York/New Jersey Maritime Port Council presented him with its Government Man of the Year Award in 1996. (That same year, he received the Admiral of the Ocean Seas Award.)

The Albany, NY, native graduated from the U.S. Merchant Marine Academy in 1955. After sailing as a merchant mariner for three years, he joined the Navy. He commanded war ships and held shore-side posts in the Navy. In his last assignment, he was deputy commander-in-chief of the U.S. Transportation Command, where he worked directly with Sacco and other maritime union officers.

During his tenure at the Maritime Administration, Herberger was known as being friendly. Upon his retirement, the staff presented him with a life-size photo when he threw out a first pitch at a minor league baseball game. Years later, he told others he had that photo as well as all his awards in his den, but his young grandchildren were more interested his pitching form than his record of service.