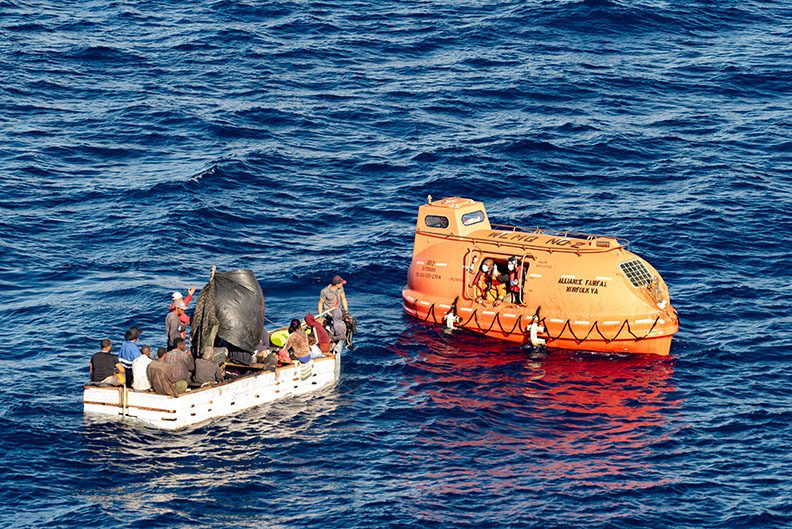 SIU members played key roles in a recent mobilization supporting Cuban migrants on an overloaded boat in the Straits of Florida.

Mariners from the Alliance Fairfax (operated by Maersk Line, Limited) provided medical assistance, water and general support for the 18 people aboard the small craft, beginning around 7 a.m. on Oct. 18. The SIU-crewed ship launched its lifeboat and remained on the scene until U.S. Coast Guard personnel arrived.

ABs Jairo Jacob Rochez and Benjamin Romero were part of the lifeboat crew.

Vessel master Capt. Chuck Hendricks said the Alliance Fairfax was headed to Port Arthur, Texas, when a crew member spotted smoke on the horizon. The smoke soon died out, but mariners then identified the small boat.

“We got a little closer and the people on the boat started waving at us,” Hendricks said. “I called the Coast Guard, and they asked us to stay on scene until they got there in an hour or so. We then launched a rescue boat.”

One of the migrants had passed out. The bilingual ABs facilitated communications with the Cubans, while all of the lifeboat personnel teamed up in delivering water and making sure the distressed individual became stable.

“This was the first time I’ve done anything like this, but there were no problems,” said Romero. “We had a plan, and everything went fine. For me, it was very nice to help people.”

“Luckily, it was the perfect day for a rescue,” said Recertified Steward Rocky Dupraw. “Bosun Boyce Wilson and Captain Hendricks and the rest of the sailors in the deck department made it seamless. We were able to stop and help these people climb to safety (aboard the Coast Guard ship). I’m sure this was the last thing anyone could have expected waking up this morning, but we train for this. This is why we’re professionals: to do a job and make sure everyone gets home safely. That means everybody.”

Hendricks said the crew’s response “was outstanding. They really shined and did a great job of carrying on the tradition of maritime unions helping people at sea who are in distress. Everybody just jumped in right away and helped out wherever they could. It was all very professional and safe, and made me proud to say I work with those guys.”

Built in South Korea in 2005, the Alliance Fairfax is a roll-on/roll-off ship that’s enrolled in the U.S. Maritime Security Program. The vessel is approximately 653 feet long and has a 104-foot beam.