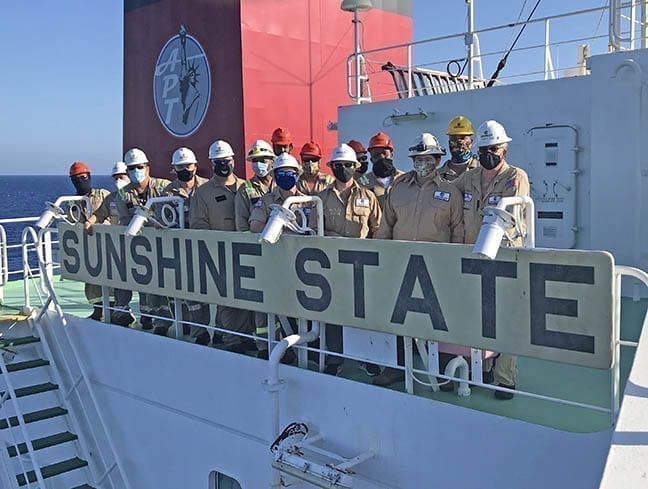 Timely assistance from the SIU-crewed Sunshine State off the Florida coast helped bring two stranded boaters to safety on April 12.

Mariners aboard the Intrepid Personnel and Provisioning vessel located the boaters – and what was left of their disabled craft – and stayed with them until the Coast Guard arrived. The Sunshine State shielded the boaters from wind and waves.

“They had been adrift for several days after their 42-foot Grand Banks-style cabin cruiser had her super structure ripped from the main deck during the height a violent storm off the coast of Fort Pierce,” reported Sunshine State vessel master Capt. A.J. Weis.

AB Robert Gross was on the wheel when the mate on watch “noticed this boat that looked kind of funny, because it had no top, almost like the bottom of a sailboat. He noticed there was a guy waving a red garment, so he called the captain. We circled around them and called the Coast Guard for them, because they had no means of electronic communication.” Gross said this was his first time assisting in any sort of rescue.

“It was pretty neat and exciting,” he said. “We stayed around them until the Coast Guard got there. This kind of thing actually happens quite a lot around the Florida Keys and Miami, where boaters end up in distress.”

Weis, a member of the Seafarers-affiliated American Maritime Officers, noted that the Sunshine State was “in the ballast leg of a routine voyage from Charleston, South Carolina, to Corpus Christi, Texas” when Third Officer Joseph Mainella saw the boater signaling with a red jacket. “The officers and crew … took immediate action to assist the stranded vessel,” Weis wrote. “The master commenced emergency maneuvers, which included slowing the engines and performing multiple round turns to calm the wind waves and seas around the stranded vessel. In the meantime, the vessel’s bridge team commenced emergency communications with USCG Sector Miami, alerting them to the vessel’s position and the condition of the two souls on board. The Sunshine State stayed on location directing units of the USCG, local sheriff’s department from St. Lucie County, as well as coordinating search-and-rescue operations with U.S. Navy Airborne unit 898.”

He continued, “Once the large Coast Guard Cutter Isaac Mayo arrived on scene, the Sunshine State remained windward of the stricken vessel to provide a lee for small boat boarding operations. Once aboard, the USCG found two people, both in need of medical attention…. The Isaac Mayo took the two survivors aboard and expedited their return to port for further medical attention. The drifting hull of the yacht La Sabia was then taken under tow to the nearest Florida port. USCG Lt. Cmdr. Nick Zieser, commanding officer of the CGC Isaac Mayo, then released the Sunshine State with many thanks, stating: ‘Thank you for discovering and reporting this case – fair winds and a safe rest of your voyage.’

“After returning to our original track line, the Sunshine State encountered the main cabin and pilot house of La Sabia floating upside down with a capsized aluminum rowboat lashed to the superstructure amongst other wreckage. The Sunshine State investigated the wreckage to ensure there were no other persons involved in the incident who were unaccounted for. The hazard to marine navigation was reported to USCG Sector Miami, which then transmitted a continuous marine navigation warning to all the vessels in the immediate area.”