Recertified Steward Just B. Self isn’t the type to seek publicity, but when he recently saw an opportunity to help showcase the U.S. Merchant Marine, he readily agreed. 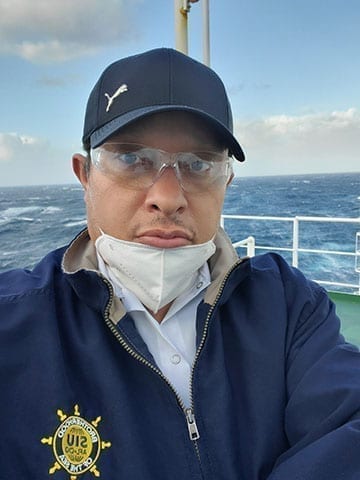 SIU member Just B. Self

Self launched his maritime career in 1991 after graduating from the Treasure Island (California) Job Corps program. He initially sailed with the National Maritime Union before that organization merged into the SIU in 2001.

In early October 2020, Self was featured in the Treasure Island Job Corps newsletter (whose editors had been reminded about him). He encouraged others to consider following his wake into the maritime industry.

“I always wanted to reach back and help with Job Corps, so I thought the article was good,” he said. “I’ve also always felt that Job Corps would be a good place for the union to get manpower.” Self, 52, said his sailing career has proven very worthwhile. He has spent the vast majority of his years working for Alaska Tanker Company, where he helped found the organization’s wellness program. He completed recertification at the SIU-affiliated school in Piney Point, Maryland, in 2012 and plans to continue shipping for the foreseeable future.

“This line of work has provided pretty much everything I need for my family,” he stated. “I like the stability and the flexibility. It allowed me to choose the best place for my family to live, too. I have no plans to leave, unless I hit the lotto or something. This is pretty much it. The work pays the bills.”

Reflecting on his initial contacts both with the SIU and NMU, Self said he’s grateful for the assistance he received.

“There were a lot of SIU chefs on Treasure Island back in 1991, and they were talking about wellness already,” he recalled. “They knew that wellness programs were coming, and all these years later, it’s real. They were very helpful to me.

“Switching to the SIU was a good transition for me, and (retired SIU Assistant Vice President) Archie Ware was like an angel,” he continued. “We met when he worked in San Francisco, and coincidentally, we’d both end up moving to Jacksonville. He really made a difference in my career.”

Self said he particularly values his career’s longevity. The lone drawback “was not being home for certain things. Other than that, while the job can be a handful, there’s no comparison to the jobs I had before I started sailing. Now, I make more money and work less than when I was on land.”

As for advice he’d give to people considering maritime careers, Self said it’s important to weigh some of the potential sacrifices involved “if they have young children. But otherwise, I’d say take advantage of this opportunity. Stack your money, get yourself set up, and maintain a positive attitude. Channel your energy and be respectful.”

He added that patience can pay off. For instance, Self first sailed as an OS even though he had a chief cook endorsement, because shipping was slow.

“The patrolman told me I’d be all right. ‘Just don’t go out there acting like you know everything.’ He was right. I got to know the steward department from the outside and built a rapport with them. Sometimes you have to do things you don’t like in order to get where you want to go. Things worked out.”