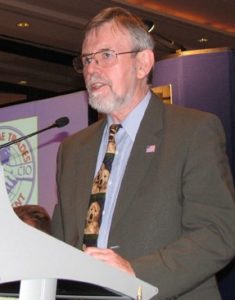 Frank Pecquex addresses delegates and guests at the 2009 MTD convention in Pittsburgh.

“Frank was a devoted union man,” said SIU and MTD President Michael Sacco. “His whole career was spent in the labor movement, and he worked hard to improve the lives of others. He will truly be missed.”

A New York native, Pecquex served as MTD executive secretary-treasurer from 1993 until his retirement in 2011 – longer than anyone else in the department’s 74-year history.

An Army reservist during the Vietnam era, Pecquex began his long career within organized labor as a teenager working at an A&P supermarket bakery, joining the (now) Bakery, Confectionery, Tobacco Workers and Grain Millers International Union. In 1964, he was a member of the Amalgamated Transit Union as a ticket-taker for Greyhound at the World’s Fair in New York City.

He graduated from St. John’s University in Queens, New York, with a master’s in history. (He remained a loyal alumnus throughout his life.)

Pecquex’s association with maritime started in October 1967 when he was hired by the SIU, working as a researcher in the union’s old Brooklyn headquarters. Later, he did administrative work and organizing before switching to the union’s manpower department. While there, he formulated a plan to encourage and facilitate continuing education and upgrading for the members.

One other thing happened while he worked at the Brooklyn hall – he met his future wife, Linda, who was a secretary for then SIU (and MTD) President Paul Hall. The couple married in 1973. In 1980, the union transferred him to Washington, D.C., to work for its legislative team. Five years later, Pecquex became the legislative director for both the SIU and the MTD.

In 1991, he was promoted to MTD administrator. He became the executive secretary-treasurer upon the retirement of Jean Ingrao.

Among many other accomplishments, he spearheaded the department’s transformation of its monthly printed newsletter to an online website.

“I worked directly with Frank for 11 years at the MTD, after knowing him since 1989 when I began working in the SIU communications office,” stated current Executive Secretary-Treasurer Daniel Duncan. “He remembered that the money within the department came from members’ dues. He made sure none of us forgot who we worked for.

“I smile recalling his love for the New York baseball teams, the New York football teams and his St. John’s Redmen,” Duncan continued. “He knew the school had updated its nickname to Red Storm, but they were always his Redmen.”

SIU Assistant Vice President Nick Celona stated, “I first met Frank in 1989, and right away we connected. He was a true believer in the trade unionist way of life, and he was dedicated to the MTD and the SIU.”

Others who worked with Pecquex described him as kind, articulate, tireless and a devoted family man.

During an interview for his retirement article in the LOG in 2011, Pecquex recalled, “In retrospect, I’m amazed that at whatever level I toiled over the years, the union’s leadership had a singular purpose: to protect and expand its members’ job security. Whether promoting vocational training courses, lobbying the White House and the Congress, or developing a strong partnership with military leaders, the SIU was second to none in advancing the message that the American maritime industry, in all of its component parts, remains vital to the nation’s economic health and strategic security.”

Besides his wife of 46 years, Linda, he is survived by his three children – Genevieve, Andrew and Courtney – and three grandchildren: Katherine, Victoria and James.