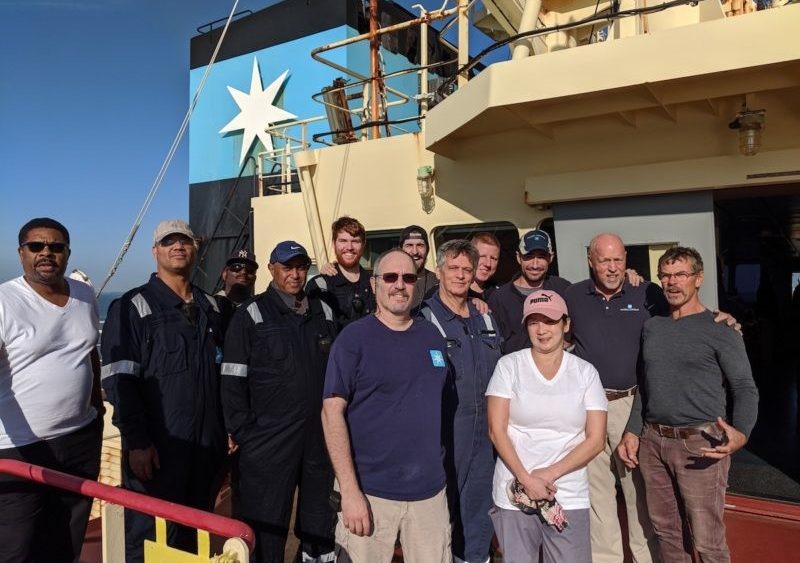 SIU mariners aboard the Maersk Montana recently sprang into action to save a boater whose vessel was sinking.

While the Montana was en route to Antwerp, the ship diverted to answer a distress call. The doomed sailboat La Belle Vie was taking on water about 200 miles off the coast of Ireland, and the lone sailor, Mikhail “Miki” Chumachenko, was in desperate need of rescue. 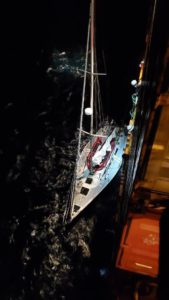 “On Sept. 20, 2019, aboard the Maersk Montana we received a SOS call pertaining to a sailboat in need of assistance. The boat had a damaged keel and needed help, so the ship headed to assist,” said Electrician Eddie Almodovar.

“The pilot ladder was ready, a pair of nets were ready to lower from anywhere on the deck and many lines were made ready,” said Third Mate Stephen Miller. “[The approach] was the tricky part. The ship needed to be at a speed slow enough to where she could run the engine astern and yet fast enough to catch La Belle Vie, which was still under sail, to maintain a stable condition.” The challenge was increased by the rough, force-eight seas, with Miller noting, “A containership is anything but graceful in a windy and rough sea at slow speed.”

Almodovar concluded, “Upon arrival to the area where the boat was supposed to be, a watch started to locate the boat and was quickly successful. After a couple hours to maneuver in place to make the rescue, the single occupant of the boat was successfully rescued and the story ended well. The boat, of course was lost, but he will live to sail another day. He was a very nice gentleman, and it was a pleasure to meet him. The crew on the ship did a very professional job during the rescue.”

The rescue was fast and efficient: The Montana began its approach towards the doomed boat at 7:45 p.m., and by 9:30 p.m., the vessel had resumed its course to Antwerp.