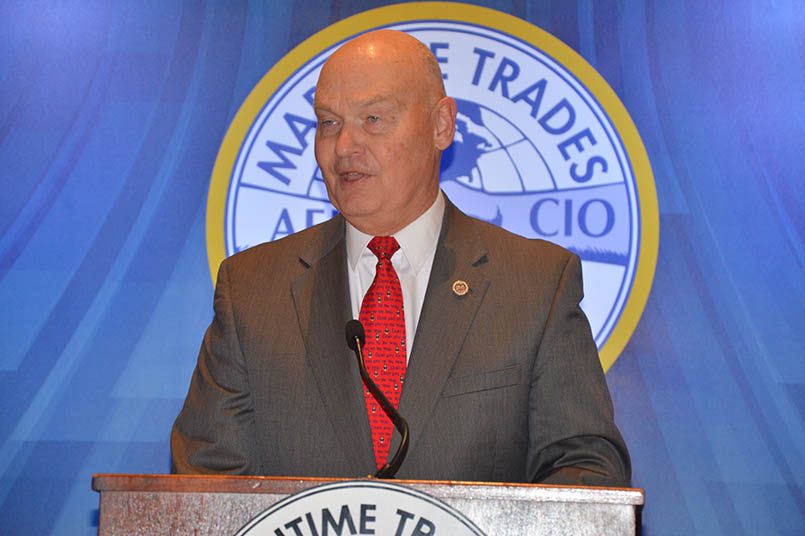 Buzby stated, “The recent heightened level of organized attacks on the Jones Act brings a new level of concern and potential adverse impact on our shipping numbers and our employment base.”

He said U.S. Secretary of Transportation Elaine L. Chao “has been tenacious in defending the Jones Act. There is no wavering in her at all.”

Buzby also described the nation’s freight cabotage law as a “bedrock, foundational piece of legislation for our industry.”

He said that although there is strong support for the Jones Act in Congress, “we really can’t take that for granted. Clearly, we have to continue to drive home the criticality of the Jones Act, because the Jones Act is jobs. The Jones Act and national security go hand in hand.” 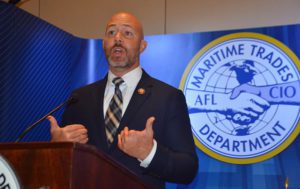 Mast, a U.S. Army veteran who earned medals including The Bronze Star Medal, The Army Commendation Medal for Valor, The Purple Heart Medal, and The Defense Meritorious Service Medal, said that when he served overseas, and for all veterans, “everything that we need to do that job – from World War II, Korea, Vietnam, the Gulf War, Iraq, Afghanistan and all points in between – has been delivered by the trades the you all represent, the men and women you represent. If we get rid of the Jones Act, the next bit of policy, the next bit of work that you will see in the United States of America will be the United States of America’s ambassador to the UN going into the UN with his thumb in the air the next time that we’re in a conflict, saying, ‘Can I hitch a ride?’ That is not the policy we need in this country, and that is one of the most important reasons the Jones Act has to stay in place. To make sure that we are doing everything to defend our maritime industry from being destroyed.”

Thompson, chair of the House Homeland Security Committee, said, “The Jones Act is fine (in terms of congressional support), but you have to be vigilant.”

He cited the misinformation campaign that happened after Hurricane Maria. 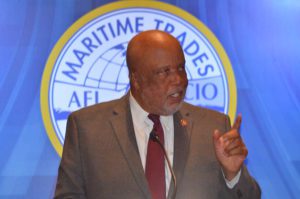 “The moment it hit, the first consideration was to relax the Jones Act, because ‘we can’t get enough goods to help the good Americans who live in Puerto Rico’. Now, if you believe that comment, I’ve got some beachfront property I want to sell you in Oklahoma,” Thompson said. “I went to Puerto Rico three days after Hurricane Maria, and I saw stuff on the docks delivered by Jones Act vessels. The question wasn’t how you get it there. The question was, once it gets there, what are you going to do with it? [People] blamed the Jones Act for a problem that had nothing to do with it.”

The MTD, a constitutional department of the AFL-CIO, is composed of 21 international unions and 21 port maritime councils in the United States and Canada representing nearly 5 million working men and women. The MTD board met Feb. 21-22 in Orlando, Florida. SIU President Michael Sacco also is president of the MTD.

The Jones Act, which helps maintain more than 600,000 American jobs, requires that cargo moving between domestic ports is carried aboard vessels that are crewed, built, flagged and owned American.