The following news release was issued by SIU-contracted Matson on December 18.

Matson, Inc., a leading U.S. carrier in the Pacific, today took delivery of Matsonia, the second of two new Kanaloa Class combination container / roll-on, roll-off (“con-ro”) ships built for Matson by General Dynamics NASSCO.  The two are the largest vessels of their kind ever built in the U.S.  They join two new containerships, Daniel K Inouye and Kaimana Hila, themselves the largest of their kind in the U.S. commercial fleet, in completing the renewal of Matson’s Hawaii fleet. 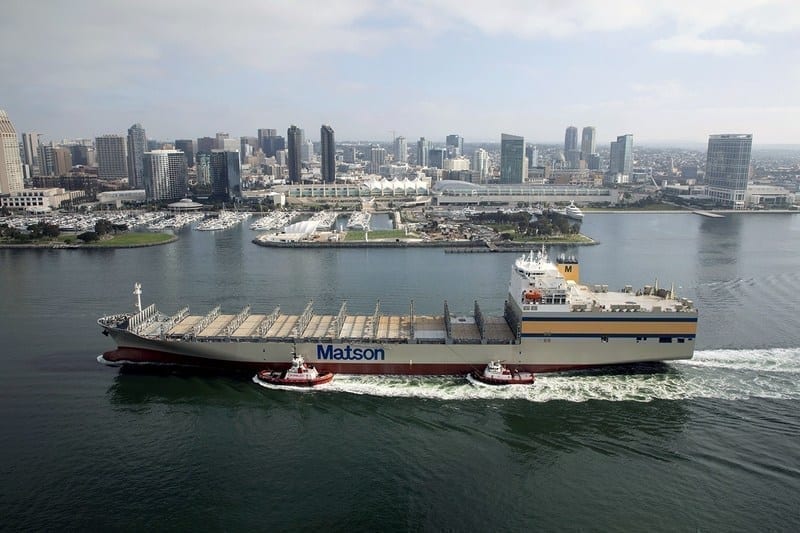 Matsonia and Lurline are each 870 feet long, 114 feet wide (beam), with a deep draft of 38 feet and weighing in at over 50,000 metric tons. The sister ships have an enclosed garage with room for approximately 500 vehicles, plus ample space for rolling stock and breakbulk cargo. Lurline entered service in January of this year.

The four new ships are the centerpiece of Matson’s nearly $1 billion investment to modernize its Hawaii service.  In addition to a nearly $930 million investment in its fleet, Matson is also investing more than $60 million in improvements to its Hawaii hub terminal at Sand Island in Honolulu, in conjunction with the State of Hawaii’s Harbors Modernization plan.

“Putting four new ships into service in a three-year span is a significant accomplishment that culminates eight years of planning, project management and coordination for teams across many departments at Matson,” said Matt Cox, chairman and chief executive officer. “Together with the modernization and expansion of our Honolulu terminal, these investments position Matson to provide efficient, reliable service to Hawaii for decades to come.”

Phase 1 of Matson’s Sand Island Terminal Modernization project was completed this year, with the installation of three new electrically powered gantry cranes and the upgrading of three existing cranes and the terminal’s power system. Phase 2, which will include improvements to the container yard and gate, will begin in 2021. In Phase 3, concurrent with the State’s completion of the new Kapalama Container Terminal, Matson will expand its waterfront and overall terminal footprint by 30 percent by acquiring adjacent piers 51A and B.

The four new ships are also Matson’s fastest vessels, with the ability to operate at or above 23 knots, helping ensure on-time deliveries in Hawaii from Matson’s three West Coast terminals in Tacoma, Oakland and Long Beach.

Daniel K. Inouye was named in honor of the late Hawaii Senator, who was a strong supporter of the U.S. Merchant Marine and a powerful advocate of the maritime industry. “Kaimana Hila” is a Hawaiian transliteration for “Diamond Head,” one of Hawaii’s most iconic landmarks.

More information on Matsonia and Matson’s fleet modernization program is available at:  https://www.matson.com/kanaloa-class.html