On November 7, SIU members working aboard the Horizon Reliance (Sunrise Operations) helped rescue the crew of a downed aircraft, adrift in a life raft roughly 1,000 nautical miles from Honolulu.

“We were en route to Honolulu, from Los Angeles, when we got the call that a small airplane went down with two pilots on board and no passengers,” said AB Kenneth Benton. “The two were delivering an airplane to a customer in Australia, they had taken off from Los Angeles when they lost an engine and went down in the middle of Pacific. An Italian vessel [the tanker Ariel] tried to rescue but were not capable, and after 19 hours of unsuccessful attempts by the foreign vessel, they allowed our professional crew to step in. With precision, we got the job done with ease, and the two survivors were of course so very grateful.”

The rescue was described by the Horizon Reliance’s master, Mark Tuck: “The winds were northeasterly and sea heights were approximately 2-3 meters. At 0800, the crew rigged a pilot ladder, gangway, and gangway net hanging at water’s edge, and painters on the starboard side. Three additional crew were used on the bridge as lookouts and to take bearings to locate and maintain a visual on the life raft. The starboard side was chosen due to the vessel’s port gangway being more narrow and possibly more difficult to assist weakened or hypothermic survivors onto the vessel. Vessel’s original plan was to approach from a northwesterly position to place the vessel between the wind and the raft, creating a lee. By the time the Ariel handed off the rescue to the Horizon Reliance, the raft was bearing 180 and approximately one to two NM distance, we were not receiving a radar signal from the raft and it had to be located visually. 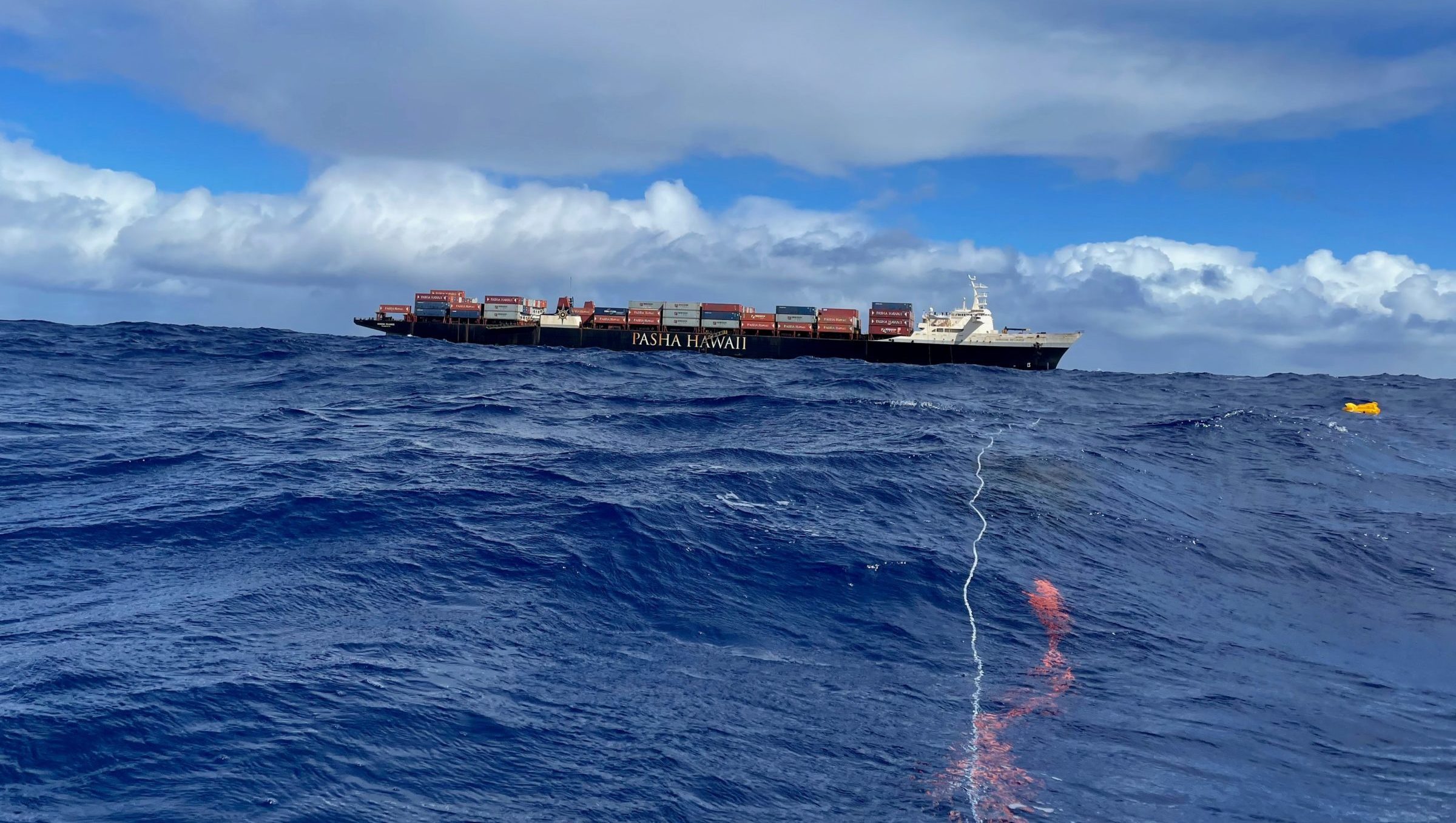 “The Ariel remained close to the raft and advised the Reliance until we had a visual. I maneuvered the vessel using the wind and a “back and fill” maneuver to maintain position between the wind and life raft, close the range and maintain a bearing that would bring the vessel alongside the raft. As the vessel closed on the raft, we briefly acquired the raft on the radar at about 0.4 NM and determined that we were closing on the raft. The distance slowly closed and two attempts with line throwing apparatus were unsuccessful. The third line thrower was a ‘dude.’ The fourth and last apparatus placed a line near the raft. The pilot had to jump into the water to retrieve the line. There was a very good lee at this time, and the pilot leaving the raft was not in danger of not being able to board the raft after retrieving the line. The line was secured to the raft, and the vessel’s crew pulled the raft to a position under the pilot ladder / accommodation ladder rig. There was a 2-3 meter swell rapping around the vessel and moving down the starboard side. The survivors were told to debark the raft on the crest of the swell and to grab the pilot ladder and not climb, but hold tightly. The crew would then operate the pneumatic winch and raise them to the main deck.”

The two men pulled from the life raft, Pilot Nathaniel Johansson and Copilot Kelly Michaels, were determined to be unharmed, and were taken to Honolulu aboard the Horizon Reliance.