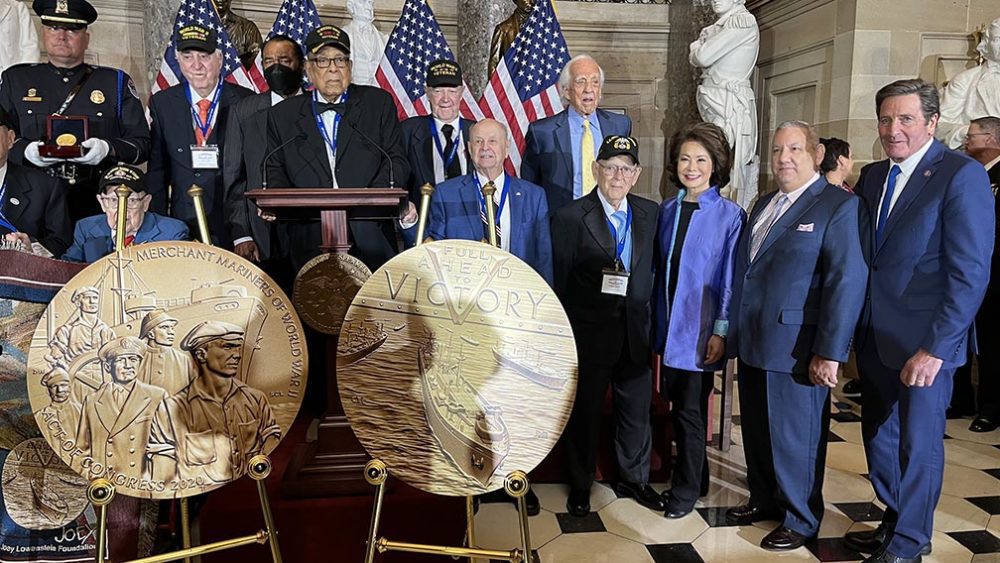 Veterans Honored on Capitol Hill After Long Voyage for Recognition

The American Merchant Marine Veterans (AMMV), whose ranks include former SIU members, provided the following news release, which has been supplemented with excerpts from a separate story by the Maritime Trades Department. SIU Executive Vice President Augie Tellez (second from right in photo) attended the ceremony. Full video of the event is available HERE.

“The bravery demonstrated by the U.S. Merchant Mariners to keep Allied Forces supplied during World War II is second to none,” said Dru DiMattia, President of the American Merchant Marine Veterans. “In the face of targeted attacks by German submarines and U-boats, the unarmed Merchant Mariners met the moment with resilience and courage, and serve as an inspiration for all of American Maritime.”

In 2020, Congress unanimously passed the Merchant Mariners of World War II Congressional Gold Medal Act thanks to the advocacy of Congressman John Garamendi (D-CA) and Senator Lisa Murkowski (R-AK). The bill was promptly signed into law though the official award was delayed due to the global pandemic.

“We gave up our yesterdays for your and their tomorrow,” stated Dave Yoho during the ceremony, which he called a “humble tribute to my fallen brothers.” Yoho served in the engine department, signing on as a 16-year-old.

“We celebrate these patriots for doing their part to preserve liberty,” Pelosi told them.

“They earned their rallying cry: ‘We deliver the goods,’” added McConnell.

After saying it was “a great day, a happy day,” Garamendi declared, “Without you, the success of the World War II would not have happened.”

House Republican Leader Kevin McCarthy (CA) said the presentation was “long overdue.” He saluted the mariners: “Everything America asked them to do, they delivered.”

U.S. Rep. Joe Courtney (D-CT) paid tribute by quoting President Franklin Roosevelt: “’The merchant marine delivered the goods when and where needed in every theater of operation and across every ocean in the biggest, most difficult job ever undertaken.’”

About the U.S. Merchant Marine of World War II:

• There were 243,000 mariners that served in the war. Some 9,521 (including more than 1,200 SIU members) perished while serving – a higher proportion of those killed than any branch of the U.S. military.

• Roughly four percent of those who served were killed.

• Merchant Mariners experienced some of the earliest action of the war due to German submarines attacking British merchant ships in the Atlantic, disrupting supply chains to America’s allies.

• These mariners were not provided veteran status until 1988. And it took another 10 years before the cutoff date for veterans’ status was changed to match the one used for the armed services.