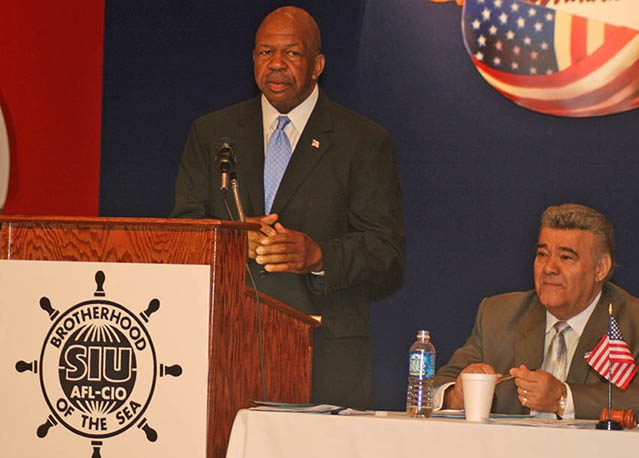 The SIU is mourning the death of U.S. Rep. Elijah Cummings (D-Maryland), a longtime backer of workers’ rights and an unwavering supporter of the U.S. Merchant Marine.

Cummings, who spoke at the 2007 convention of the Seafarers International Union of North America, passed away Oct. 17 at age 68. His office reported that the congressman’s death was “due to complications concerning longstanding health challenges.”

Born and raised in Baltimore, Cummings served in the U.S. Congress since 1996. Previously, he was a member of the Maryland General Assembly for 14 years. Cummings graduated from the University of Maryland School of Law and passed the state bar in 1976.

“Elijah Cummings was a tremendous leader, a true friend and a first-class individual,” stated SIU President Michael Sacco. “He always – without fail – stood up for workers’ rights and for the American maritime industry. He was someone you were grateful to have on your side, and it would be a huge understatement to say he will be missed.”

SIU Senior Political Consultant Terry Turner noted, “The Congressman had a portfolio centering on issues that went to the heart of America, yet had the time and effort to lift our maritime issues to the nation’s attention.”

SIU Political and Legislative Director Brian Schoeneman offered this tribute online: “There are few members of Congress, on either side of the aisle, that I’ve worked as closely with over the last 20 years than Elijah Cummings. He served as both Chairman and Ranking Member of the House Transportation Committee’s Coast Guard subcommittee, which has jurisdiction over a lot of maritime law. He was as tough as they come, and even when I knew his questioning was friendly, my heart always beat a little faster when I was on the hotseat testifying before that Committee and the Chair recognized the Gentleman from Baltimore for five minutes’ worth of questioning…. Congress has lost another of its lions, and I will always thank him and his staff for what he did for my industry.”

According to news reports, Cummings in recent years used a wheelchair to get around and braced himself with a walker when he stood.

U.S. Sen. Ben Cardin (D-Maryland), the senior member of the commonwealth’s congressional delegation, said Cummings’ passing “leaves an irreplaceable void in our hearts, in our Maryland and in our Congress. Quite possibly no elected official mattered so much to his constituents.”

Cummings in 2012 introduced legislation aimed at repealing a provision added at the last minute to a highway bill that reduced the U.S.-flag vessel carriage of food aid cargoes overseas. He also was a strong advocate of anti-piracy measures.

In 2011, he issued a National Maritime Day statement that read in part: “In my capacity as the Chairman of the Subcommittee on Coast Guard and Maritime Transportation, I will continue to support the development of a comprehensive maritime policy that will protect the integrity of the Jones Act, that will support the Maritime Security Program, and that will promote the growth of the U.S.-flagged fleet competing in our foreign trade.”

The Maritime Trades Department’s Port Council of New York-New Jersey in 2008 honored Cummings with its Government Man of the Year Award. At that time, SIU Vice President Atlantic Coast Joseph Soresi, who also serves as president of the port council, stated, “Very simply, Congressman Cummings speaks our language and supports our issues. He is a no-nonsense legislator who supports working families and in particular backs the men and women who work in the maritime trades…. Congressman Cummings is dedicated to the same things that motivate us in the labor movement: protecting workers’ rights, securing our homeland, ensuring health care coverage and educational opportunities for everyone, and the list goes on and on.”