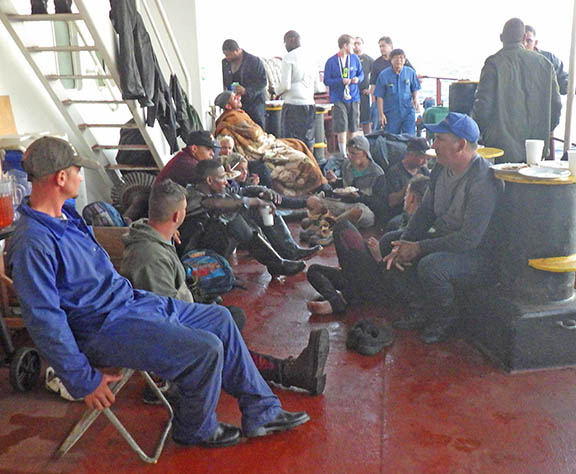 Fifteen Cuban Nationals today are safe, thanks to the efforts of SIU crew members and officers aboard the Sealift Inc.-operated and union-contracted Sagamore.

Watch standers aboard the vessel caught glimpses of the 15 individuals during the afternoon hours of Jan. 3, while transiting the western reaches of the Straits of Florida en route to Houston. The Cubans were hailing for assistance by frantically waving their arms. All were aboard a makeshift watercraft which was stranded and at the mercy of the straits’ currents.

Sagamore vessel master Capt. Paul Bonney immediately notified officials at the U.S. Coast Guard Group in Key West, Florida, and briefed them on the situation. Bonney was advised that the agency would immediately dispatch the U.S. Coast Guard Cutter Richard Ethridge to the location to assist in rescue and recovery operations. Bonney then maneuvered the Sagamore into position alongside the stranded craft, and the SIU crew sprang into rescue mode.

“Members of the crew performed like a well-oiled machine during the rescue operations,” said Bosun Brian Ebanks. “I was so proud of everyone involved because each person knew exactly what to do and when to do it.

“Thanks to their collective quick and decisive efforts – both byproducts of their training – the rescue went off smoothly and without any negative incidents,” Ebanks concluded. “All involved deserve kudos for a job well done.”

Ebanks added that once the stranded migrants had been extracted from their vessel, they were brought aboard the Sagamore and given water, food, blankets and clothing. Not long thereafter, the Richard Ethridge arrived on the scene and crew members transferred the migrants to the cutter.