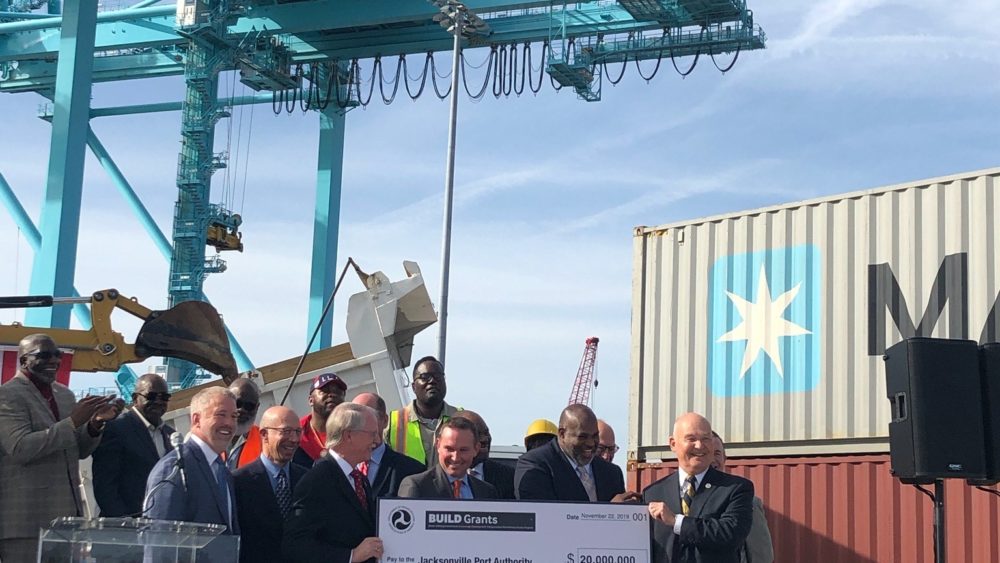 The U.S. Department of Transportation has issued the following news item (dated Nov. 22) and the accompanying photo.

Fiscal Year 2019 BUILD Transportation grants are for investments in surface transportation infrastructure and have been awarded on a competitive basis to projects with a significant impact in their local or regional communities. BUILD funding supports roads, bridges, transit, rail, ports or intermodal transportation.

“An investment in the Port of Jacksonville delivers benefits for the local economy and for American workers. It is a central part of President Trump and Secretary Chao’s belief of investing in infrastructure to grow our economy and create jobs. This grant will also indirectly help support the jobs of the American civilian mariners who crew military sealift vessels that help us carry the fight wherever we must go” said Maritime Administrator, Admiral Mark Buzby.

The International Cargo Terminal Modernization Project will reconstruct and modernize approximately 100 acres of the SSA Marine cargo terminal on Blount Island across six phases.  In addition to repaving, the project will improve storm water management, install new lighting, signage, and other utilities, and will be designed in a manner to enhance future operations.

Repaving the container yard will restore the terminal to a state of good repair, with long-term maintenance supported by port-generated revenues. The project benefits from a strong public-private partnership, with a broad array of stakeholders collaborating to support and deliver the improvements.

During construction, the terminal will continue to handle container, roll-on/roll-off, breakbulk, and general cargoes, with a significant increase in capacity once the project is completed. The project will also result in operating efficiencies which enhance economic competitiveness.

The program selection criteria encompassed safety, economic competitiveness, quality of life, state of good repair, environmental sustainability, innovation, and partnerships with a broad range of stakeholders.  For this round of BUILD grants, the maximum grant award is $25 million, and no more than $90 million can be awarded to a single State.