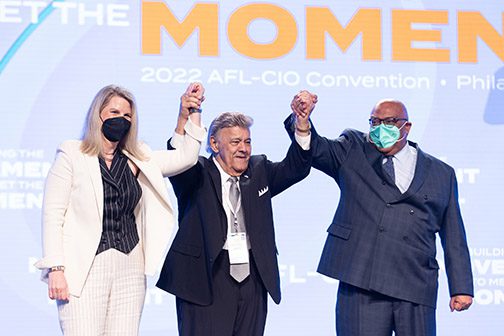 In many ways, 2022 represented a gradual return to normalcy for the SIU. With the pandemic largely in the past, the year saw new vessels, new construction, new contracts and wage reopeners, and multiple conventions with themes focused on the future.

SIU members answered the call time and time again, even amid a global labor shortage. While many union brothers and sisters upgraded their skills and earned new ratings by returning to the SIU-affiliated Paul Hall Center for Maritime Training and Education, union representatives ramped up the SIU’s recruiting efforts, both in person and online.

The following is an overview of some of the year’s top stories for the union, the maritime industry as a whole and the labor movement.

In January 2022, the second of two reflagged vessels joined the U.S.-flag fleet of American Roll-On Roll-Off Carrier (ARC): the ARC Commitment and the ARC Defender. These roll-on roll-off vessels, which are both enrolled in the U.S. Maritime Security Program (MSP), “are among the most capable and militarily useful vessels in the U.S.-flag commercial fleet, able to carry tracked and wheeled vehicles, helicopters, and other high and heavy project cargoes,” according to ARC. Additionally, Crowley flagged in the tanker Stena Polaris while the union regained jobs aboard the tanker Seabulk Pride when the ship was delivered to Seabulk.

Also joining the fleet in 2022 was the MV George III, an LNG-fueled Ohanaclass vessel operated by Pasha Hawaii. Additionally, more new vessels are on the way, as three new Aloha-class containerships were ordered by Matson – to be built by union labor at Philly Shipyard. The first of those vessels is expected to be delivered in 2026.

The past year also included a mix of virtual and in-person conventions, both with the union’s own events as well as those of SIU affiliates and industry partners.

The SIU-affiliated Maritime Trades Department, AFL-CIO (MTD) hosted its Quadrennial Convention in Philadelphia June 9-10. In a schedule which included speeches and presentations from various maritime and labor leaders, SIU President Michael Sacco was re-elected to serve as president of the MTD.

The following week, Sacco oversaw the elections of Liz Shuler as president of the AFL-CIO and Fred Redmond as the federation’s secretary-treasurer. Sacco was reelected to the AFL-CIO Executive Council during a convention that featured in-person remarks from President Biden. The SIU-affiliated Seafarers Entertainment and Allied Trades Union (SEATU) conducted a virtual convention on Sept. 20, while the SIUNA convention, with its theme “Building for the Future,” took place virtually on Sept. 14. Both saw the respective executive boards reelected, with the full confidence of those in attendance.

In other maritime news, the merchant mariners who served during World War II were finally awarded the Congressional Gold Medal, in a ceremony conducted in the Capitol Building on May 18.

The sanctity of the Jones Act was violated in September, when a onetime waiver was granted to a BP Petroleum tanker to sell their cargo in Puerto Rico in the wake of a hurricane. In a joint statement from U.S. maritime unions (including the SIU), the groups pointed out,

“This waiver was unnecessary. U.S.-flagged vessels and foreign-flagged vessels carrying legal cargoes of fuel, either from American ports or from foreign ports, had safely discharged their cargoes in Puerto Rico after the storm. American ships were available. American crews were available. But none of that mattered, because the political optics of a ship waiting to bring fuel to the island apparently matters more than a century of bedrock American law.”

This waiver situation was used as fuel for political advocates and allies to attach specific language to the National Defense Authorization Act of 2023, which is expected to pass as of the writing of this article. That language tightened up the Jones Act waiver process, restricting who is authorized to grant such waivers, and other codified changes. The NDAA also included many outright gains for the maritime industry, which will be covered in detail in the February issue of the Seafarers LOG.

The contracts department of the SIU was busy in 2022, working out the standard freightship and tanker agreements, which were overwhelmingly ratified by the membership. The five-year pacts increase wages, maintain benefits, help ensure shipboard internet access, and preserve every SIU job.

Those were far from the only contracts in the news in 2022. New pacts also were reached (or existing ones were extended) with TOTE, Key Lakes, Port City Marine Services, E.N. Bisso & Son, Chesapeake Crewing, Intrepid Personnel and Provisioning, American Petroleum Tankers, Liberty Maritime, Maersk, Seabulk, Marine Personnel and Provisioning, Waterman Steamship, and Subcom.

There were quite a few instances of rescues at sea in 2022, in which SIU members went above and beyond to save lives. Full recaps of each rescue are available on our website (and in the pages of the Seafarers LOG), but notable examples include: MT Pennsylvania in April; the Endurance in June; the NY Waterway tugboats John Stevens and Garden State in July; the Pacific Tracker in July; The Maersk Tennessee in July; the Centerline Logistics-operated tugboats Richardson Sea and Chabria Sea in July; NY Waterway ferry Abraham Lincoln in August; the National Glory in October; the Alliance Fairfax in October; the Sunshine State in October; and the American Phoenix in November.

Various construction projects and curriculum enhancements took place throughout the year at the Paul Hall Center, a staple for many Seafarers. The school offers the most U.S. Coast Guard-approved courses of any maritime institution in the nation. Those classes include ones for entry-level students and upgraders.

A massive renovation at the hiring hall in Norfolk, Virginia, got underway and has continued in the new year, with an expected completion date likely in the second quarter.

Meanwhile, Election Day saw strong performances by SIU-backed candidates. The vast majority of those running for House or Senate seats with support from the union’s voluntary political action fund won their respective races.

Throughout the year, the union actively advocated for laws and programs that keep the U.S. Merchant Marine afloat, including the Jones Act, cargo preference, the Maritime Security Program, the new Tanker Security Program and more.