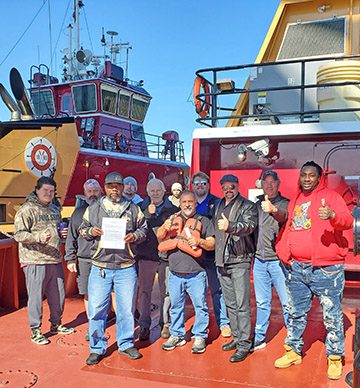 The union represents 70 boatmen at Bisso, which is headquartered in New Orleans. They work as wheelmen, deckhands and engineers aboard a fleet of 14 tugs, providing ship docking and offshore towing services.

“We had a lot of experience on the committee, along with some newer guys,” Westbrook said. “The company, to their credit, stepped up and negotiated a package that reflects the current labor market. They recognize the value of their employees. I think the contract is a tremendous retention and attraction tool, and it’s a win-win for both sides.”

Wells stated, “All in all, the negotiations were pretty tough, but in the end, both sides came to an agreement. After going out and speaking with the guys, everybody was very pleased. Personally, I was pleased with the company’s willingness to work with us.”

He added that the annual wages increases are the largest he’s seen in his 35-year tenure with Bisso.

“That’s the highlight to me and I think it’s the same for the rest of the guys,” Wells said. Strother, a nine-year employee, served as a bargaining-team member for the first time and said he found the process “interesting. At times we were joking, and at other times it was very stressful. I’m very happy with the way it turned out.

“We tried to get the best agreement possible for our co-workers,” he added. “We didn’t necessarily get everything we wanted, but we did really well.”

In addition to calling for yearly wage increases, the contract also boosts base pay; includes an immediate cost-of-living bonus for all ratings; and features a longevity bonus for employees who’ve been with the company for at least 30 years.

The pact maintains medical coverage at the top level available through the Seafarers Health and Benefits Plan (Core Plus), adds a paid holiday, expands the bereavement clause, doubles the rate for maintenance and cure, and doubles the reimbursement for personal protective equipment.