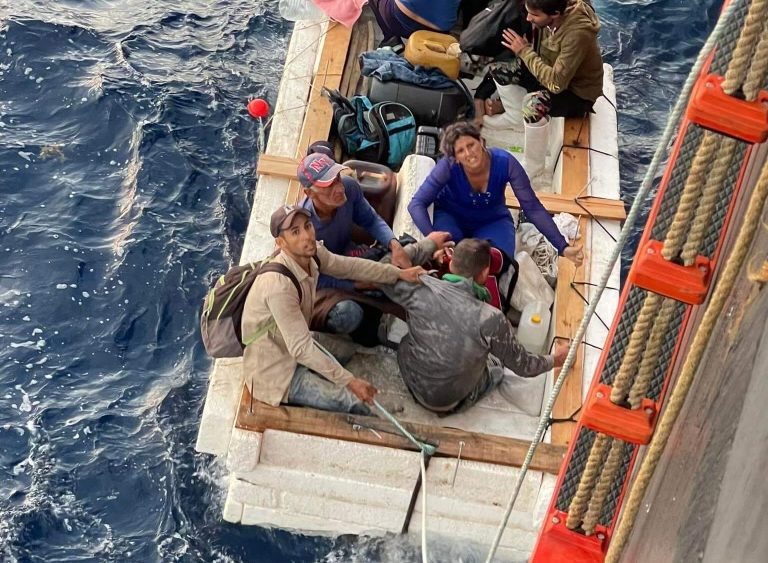 Seafarers once again answered the call on Oct. 29, as those sailing aboard the National Glory aided in the rescue of seven adrift boaters off the coast of Cuba.

Shortly before 6 p.m., a small craft was spotted off the starboard side of the Intrepid Personnel and Provisioning-managed containership. The SIU-crewed vessel diverted course, and quickly determined that those aboard the small boat were in need of assistance, as their craft had lost propulsion and they were adrift.

All seven passengers were brought aboard and received blankets and dry clothes, as the cargo ship proceeded to a designated rendezvous with the U.S. Coast Guard. The passengers were transferred to the Coast Guard just after midnight, and the National Glory resumed its previous route to Houston.

Bosun Nagi Ahmed Mihakel said, “If we didn’t see them, seven lives would of be gone. The ocean doesn’t have mercy, and if a heavy wind hits, or a strong wave, it can wash away islands or cities. That tiny raft, which was custom built, wouldn’t last a second.”

Mihakel continued, “They told us we were the only ones that went back to save them. A few ships passed them, and they weren’t sure if they even saw them, or if they thought they were okay.”

In an email sent to the bosun after the rescue, the captain wrote, “Great job by you and the entire SIU crew spotting the raft, notifying the bridge, helping translate with the survivors and safely recovering all seven survivors. Together, the crew represented the best of what the U.S. Merchant Marine is all about. It is pleasure sailing with you and this crew of professional SIU mariners. The survivors will forever be grateful for the crew’s professionalism, seamanship and compassion shown.”