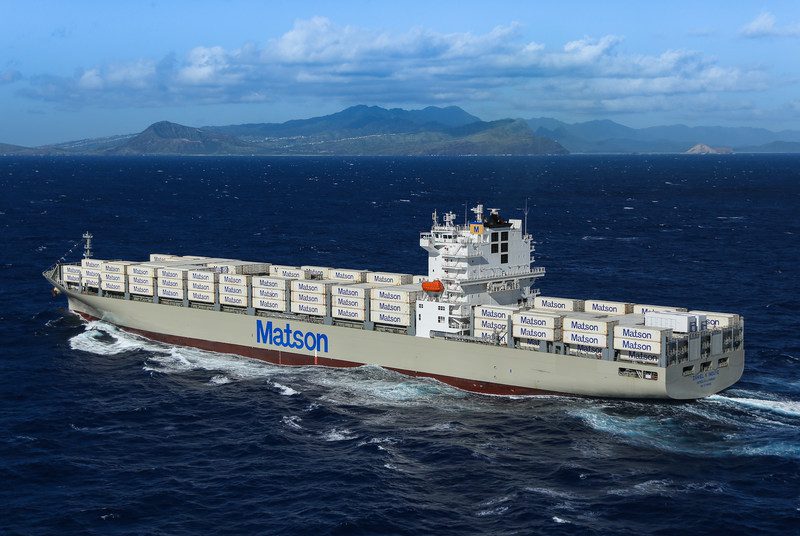 Seafarers-contracted Matson, Inc. recently announced that it has signed contracts with Philly Shipyard Inc. – which employs union labor – to build three new 3,600 TEU Aloha-Class containerships. The first vessel is expected to be delivered in the fourth quarter of 2026, with subsequent deliveries in 2027.

The new vessels will join the two Aloha-Class ships previously built for Matson by Philly Shipyard: the Daniel K. Inouye in 2018 and the Kaimana Hila in 2019. Like their sister ships, the new vessels will be equipped with dual fuel engines that are designed to operate on either conventional marine fuels or liquefied natural gas (LNG), as well as other “green ship technology” features, such as a fuel-efficient hull design and environmentally safe double hull fuel tanks and freshwater ballast systems. While the earlier ships required some modification to operate with LNG, the new ships will be designed to run on LNG from the start.

The overall order is valued at around $1 billion, according to Matson and the shipyard.

“We are excited by this announcement and look forward to the continued modernization of the SIU-crewed fleet,” said SIU Vice President Contracts George Tricker. “The fact that the ships are being built by fellow union members makes the announcement even better.”

Steinar Nerbovik, Philly Shipyard’s president and chief executive officer, stated, “We are both honored and filled with immense pride that Matson has once again chosen Philly Shipyard to build its vessels. We have a proven track record of building high quality containerships and are greatly looking forward to this renewed partnership. With a revitalized workforce nearing 1,400, our shipyard is ready for this important work.”

The 854-foot Aloha-Class vessels are the largest containerships ever built in the U.S., and are designed to operate at speeds in excess of 23 knots. The three new Aloha-Class ships will replace three vessels currently deployed in Matson’s China- Long Beach Express (CLX) service, which will in turn replace three older vessels currently deployed in its Alaska service, redeploying bigger and faster vessels into that trade lane.

“Our existing Aloha-Class ships are among the fastest, most efficient vessels in the Matson fleet,” said Matt Cox, chairman and chief executive officer of Matson. “These new Jones Act compliant vessels will be built specifically for our China- Long Beach Express service, and like their sisterships, are expected to help Matson achieve its 2030 greenhouse gas emissions reduction goal while also providing additional capacity and speed benefitting our Hawaii service as well as the CLX.”

Philly Shipyard is a leading U.S. commercial shipyard constructing vessels for operation in the domestic Jones Act trade lanes. Prior to Matson’s first two Aloha- Class ships, the shipyard delivered four newly built Jones Act containerships for Matson between 2003 and 2006. “Winning this order creates historic backlog for Philly Shipyard, as well as great visibility through 2027 for its shareholders and other stakeholders,” said Kristian Rokke, chairman of the board of Philly Shipyard ASA. “Long term, it also supports the yard’s vision to deliver quality vessels, while pivoting between commercial and government contracts.” “It is the ultimate compliment when a former customer returns for another project. We are proud of the six vessels previously delivered to Matson, and are again ready to execute and deliver this important project,” added Nerbovik.