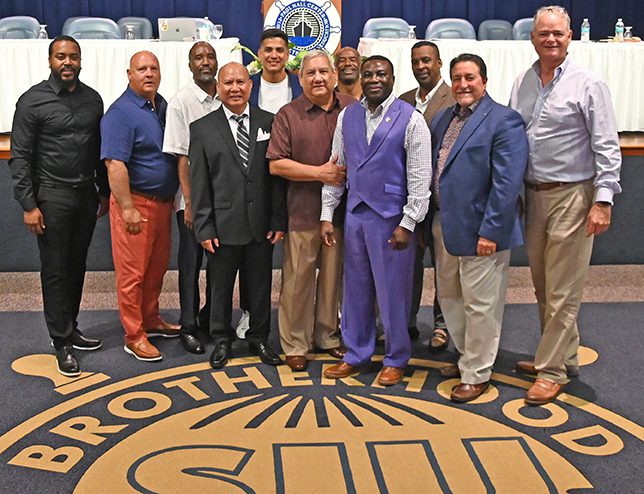 Six SIU members recently registered ground-breaking achievements in their respective careers by ascending to the highest rung of the steward department’s upgrade training ladder. Each carved their names in the chronicles of SIU history August 8 during the union’s monthly membership meeting in Piney Point, Maryland, when they graduated from the Paul Hall Center’s (PHC) Steward Recertification Program.

Completing the two-week course, which is regarded as the school’s top steward department curriculum, were: Bryan Alvarez, Marlon Brown, Alexander Cordero, Sajid Foster, Bruce Johnson and Abraham Mills. During their training, each received instruction in a wide range of disciplines including computer technology, social responsibilities, leadership, Coast Guard updates, baking skills and other department-specific workshops on sanitation, nutrition and more. The course also offered insights on collective bargaining agreements, functions of the various departments within both the SIU and the Seafarers Plans, and the union’s affiliations with the Maritime Trades Department and its parent group, the AFL-CIO.

In keeping with tradition, each of the newly minted recertified stewards addressed those in attendance at the membership meeting. During their presentations, they discussed their respective careers and offered valuable insights to the apprentices. They also expressed gratitude for the opportunities they have been afforded to enhance their skills, improve their lives and those of their families, and become better shipmates to their union brothers and sisters aboard SIU-contracted vessels. Collectively, they also thanked the union leadership for its continued support, and the PHC vocational and hotel staffs for providing excellent instruction and accommodations, respectively.

Foster was the first to take the podium. He sails out of the Port of Wilmington, California, and launched his SIU career in the Crescent City.

“I started my career with the SIU in 1996 in New Orleans; I was 18 years old, fresh out of high school,” he said. The initial portion of Foster’s career was spent in the inland division, followed by his transition into deep-sea sailing.

Throughout his career, the union “gave me many opportunities” the Louisiana native told those in attendance. “And after all of those, the SIU is still in my corner, still providing me with even more opportunities. I stand before you today as a living embodiment of the fact that hard work does pay off.”

Foster told the trainees that they had the whole world before them: the opportunity to excel and have rewarding careers. “Stay strong and soak up everything that you have learned here at the school and that you will learn once aboard vessels at sea. The sky is the limit,” he said.”

Foster advised all rank-and-file members to donate to SPAD, the SIU’s voluntary political action fund, so that the union’s leadership will have the resources they require in order to work on behalf of the membership’s best interests.

Mills signed on with the union in 1999. He currently ships out of the Port of Houston.

“On my first ship, I sailed as a GVA (general vessel assistant),” he told the audience. “But in 2000, I came to the school here in Piney Point for galley operations.”

From then until now, it’s been one positive after another for Mills, who hails originally from Sekondi Essikdu, Ghana. “The union has been a very important part of my life and benefitted me greatly,” he said. “Thanks to the SIU, I have been able to provide a great quality of life for my family.”

Sending a shout-out to the union leadership, Mills thanked SIU President Michael Sacco, the regional vice presidents and the Paul Hall Center staff for the opportunity to enhance his kills in the Steward Recertification Program. He also expressed his appreciation to the union’s contracts department for successfully negotiating “good standard contract agreements.”

To the trainees, he said; “Nobody is telling you that the road will be easy, but I do not believe that the union brought you this far just to leave you, so always do your best. Payday is coming.”

Brown joined the SIU ranks in 2000 and is home-ported in Ft. Lauderdale, Florida.

“It’s my distinct honor to be here today,” he told his peers upon taking the podium. “Likewise, I am thrilled to have this opportunity (to complete the PHC’s top steward department curriculum).”

Brown acknowledged the major role the union has played in enhancing the quality of his life and also the positive impact that being a Seafarer has had on his family.

“The union has been extremely important to me and my loved ones,” he said. “I can’t thank the SIU enough for all it has done to improve the quality of life for me as well as that of my family.” He credited the union’s officials for providing and protecting jobs for members as well as the PHC instructors and staff for vocational training opportunities. Brown encouraged fellow members to back SPAD and also to exercise their right to vote during all elections.

“To the trainees, please work hard while you are here,” he said. “And when you get out there aboard vessels, I advise you to keep your ears open and your mouths shut.”

Cordero sails out of the Port of Jacksonville, Florida. Born in the Republic of the Philippines, he joined the union in 2003.

Since joining the SIU, “I have substantially improved the quality of my life and that of my family as well,” he said. “I have also learned and experienced many positive things that helped me excel in my chosen career.

“But my main goal really was to become a recertified steward,” he continued, “And thanks to the help of the SIU, that has been achieved today.”

Cordero described his recertification training as a valuable commodity, noting “it opened my eyes on how the union operates. The information I received on contracts, medical benefits, pensions and the money purchase plan will prove invaluable when I return to work on the ship and interact with my co-workers and shipmates.”

He added that he had experienced and seen firsthand the unmatched dedication exhibited by union leadership in looking out for the good of the rank-and-file.

In closing, Cordero shared his belief that “it is through hard work and diligence that one may advance and improve in life and on the job.” In that spirit, he encouraged the trainees to do the same. “Never give up, never quit learning and work hard,” he said.

Johnson, whose home port also is Jacksonville, was the veteran of his class, having initially sailed aboard SIU-contracted vessels once in 1980 and again in1981 before returning to the SIU for the long hall in 1994.

Since becoming a Seafarer, Johnson said he has sailed the world as a chief steward. “The union has been instrumental in my life because it gave me what I was lacking: opportunity,” he said, “One which I have taken full advantage of.”

Reflecting on his return to the PHC for recertification training, Johnson said: “I could not help but notice the amazing upgrades that I have now seen firsthand. When I started here, there were bungalows instead of this spectacular hotel … and look at the beautiful media center.”

He thanked the PHC instructors for the knowledge they imparted on him and his classmates and the staff for providing outstanding accommodations.

“The union leadership needs our help when it comes to protecting our industry and jobs,” he said in closing. “We need to always do our best on the job. We need to upgrade our skills and recognize that SPAD helps to hold all of us together.”

Alvarez sails out of the Port of San Juan and has been an SIU member for 13 years.

“I was a member of PHC Trainee Class 713 back in 2008 and was only 19 years old at the time,” he said. “I already had knowledge about the maritime industry because of my father, Bosun Julio Cesar Alvarez. That makes me a second-generation Seafarer and a legacy in the flesh thanks to the SIU.”

Alvarez told the audience he has sailed aboard a variety of vessels while working for many different companies. “I did 232 days straight on the Noble Star, my first ship,” he said. “That vessel no longer exists, but the experience I gained on it while working with great shipmates from this union improved my skills significantly.”

To continue honing and expanding his skills, Alvarez returns to the PHC every other year for upgrade training. “Consistency is key to success,” he told the trainees. “Remember, never settle for less when you can be so much more.

“Amongst you are the future leaders for this industry,” he continued. “Waste no time and be as professional as you can be from day one…. Upgrading is a must.”

Alvarez thanked everyone who played a role in making his steward recertification training possible, including union officials and his wife, Rubi Pacheco. “She worked with and supported me every step along the way,” he said. “I’m a father of three beautiful kids; thanks to her and the SIU, I have been able to provide them a good education and a good lifestyle.”

In closing, Alvarez encouraged his brothers and sisters to support SPAD to ensure that the union leadership will continue to have the resources it requires to continue promoting and protecting the membership’s interests.

“The SIU changes lives every day,” he said, “I am proof of that!”