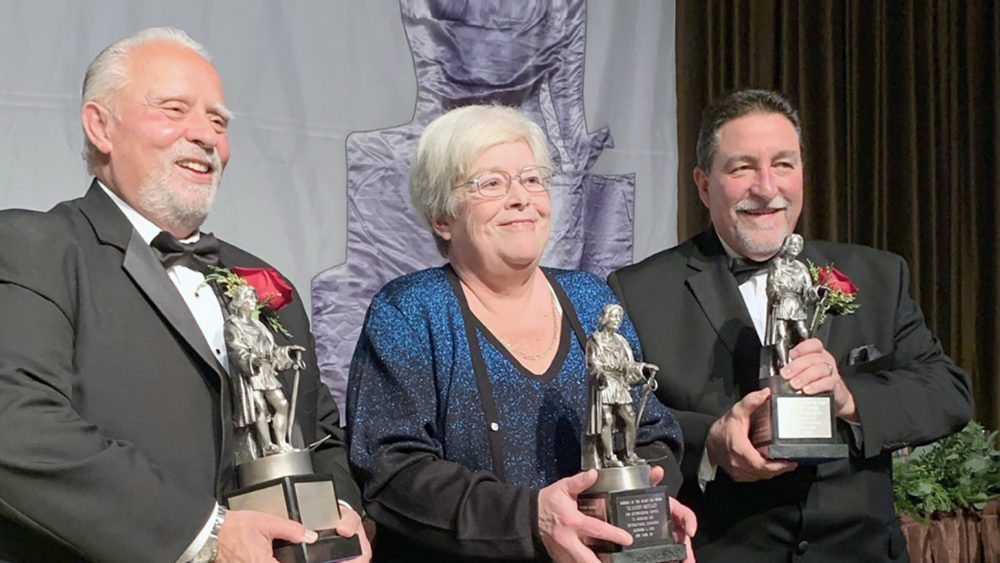 On a night when much of the spotlight focused on him, SIU Secretary-Treasurer David Heindel mainly wanted to talk about others.

Heindel on Dec. 3 received the Admiral of the Ocean Sea (AOTOS) Award in New York, a prestigious honor presented each year by the United Seamen’s Service (USS). This year’s honorees also included Bill Woodhour, president and CEO of Maersk Line, Limited (MLL); Kathy Metcalf, president and CEO of the Chamber of Shipping of America; and longtime labor relations icon Tony Naccarato, who garnered what is dubbed a Special AOTOS Award.

Prior to those presentations, Gen. Jacqueline D. Van Ovost, USAF, commander of the U.S. Transportation Command, addressed the audience of more than 600, including SIU President Michael Sacco, Executive Vice President Augie Tellez and others (see story, this page).

Heindel called his award “the honor of a lifetime,” and he thanked many people for supporting his work throughout the years, including his family, Sacco, other SIU officials, and colleagues from the International Transport Workers’ Federation (ITF), several of whom travelled to the awards dinner from overseas. (Heindel chairs the ITF Seafarers’ Section.)

He emphasized that throughout his decades as a union official, following several years as a rank-and-file mariner, his aim remained constant.

“Whether we’re talking about the crew-change crisis that has consumed our many hours on Zoom or the latest issue with the supply chain, shipboard automation, alternative fuels, training requirements or almost any other maritime-related topic, my focus ultimately is on the wellbeing of the individual seafarer,” Heindel said. “That’s what motivates me, and on the rare occasions I look back, it’s what I’m most proud of.”

Reflecting on his time with the union, Heindel recalled, “I joined the SIU in the early 1970s, and one reason I’ve always believed in the union is that we don’t stand still. We constantly strive to make improvements, and the results speak for themselves. Today, our members have free access to world-class vocational training at our affiliated school in Piney Point, Maryland. They’re part of a top-of-the-line, fully funded pension plan that gives them security when they look ahead to retirement. They’re covered by excellent medical benefits, and they’re protected by great contracts – which means their families are protected, too.

“Another way we’ve helped our rank-and-file members is by keeping up with the times regarding recordkeeping, getting them easy access to their individual shipping and registration information, and being able to communicate quickly using multiple outlets, regardless of whether they’re at sea or ashore,” he continued. “That’s been a main focus throughout my tenure as the SIU’s secretary-treasurer, and while – like so many other things – the work is always ongoing, and we’ve made extraordinary progress over the years.”

He also credited the USS and ITF and cited examples of their recent accomplishments.

Metcalf and Naccarato both applauded the industry for its collectively cooperative nature, while also sharing insights about their respective backgrounds.

Woodhour, unable to attend because of a medical procedure, delivered his remarks via recorded video. He stressed the critical importance of the U.S. maritime industry and listed potential steps to expand it.