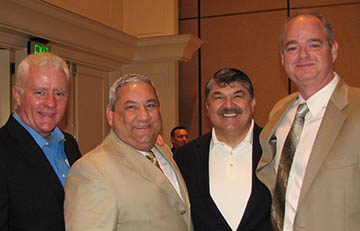 Likely due to the former quality, the initial reaction among SIU officials and staff to unofficial news of Trumka’s death on Aug. 5 primarily consisted of disbelief. Trumka’s high-energy personality and regular appearances on television (promoting workers’ rights) as recently as that same week seemingly precluded his departure, and there had been no hints of health problems. Unfortunately, confirmation soon followed: Trumka, 72, succumbed to a heart attack while on a camping trip with family. 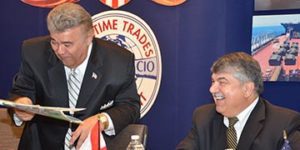 Longtime friends SIU President Michael Sacco (left) and AFL-CIO President Richard Trumka share a laugh in 2015 before the start of an MTD meeting.

“Rich and I worked together for decades, going back to the 1970s, when we were involved in labor disputes in Missouri, Kentucky and Illinois,” Sacco stated. “Throughout his entire career, no one worked harder for America’s working families.

“Rich was fearless and down-to-earth, and even though he had plenty of formal education, at his core he remained a working-class union guy and a family man,” Sacco continued. “He never forgot his roots with the Mine Workers. Those of you who were lucky enough to hear Rich give a speech in person know that he commanded a room like few others. His passion and intelligence and foresight always came through loud and clear.”

SIU Executive Vice President Augie Tellez said, “If you ever heard Rich address a crowd, you immediately knew what this man was about. His passion, fervor and compassion for the working men and women of this country was the hallmark of his being. Little doubt was left as he bared his soul in the struggle for equality both economically and socially. He was truly an American hero. He had a soft spot for the Seafarers going back to his Mine Worker days in the 70s, and many of us got to know him personally. The world has a lost a good man, but there is no doubt at all that his legacy will be carried on by millions.”

SIU Secretary-Treasurer David Heindel stated, “With heavy hearts, we learned of the passing of Brother Trumka. Rich was a true leader and inspiration to many. Our heart goes out to Rich’s family as well as the 12 million brothers and sisters in his extended family of the Federation. He will be missed.”

President Biden described Trumka as “a dear friend, a great American, and a good man. I will miss him as will the countless workers whose lives he made better, and the labor movement he led with daring vision. As I told his family after we heard the news, Jill and I send our love –today and always.”

On the Senate floor the morning of Aug. 5, Schumer said, “The working people of America have lost a fierce warrior, at a time when we needed him most. Just yesterday, Rich was lending his support to the striking miners in Alabama. Following in his father’s footsteps, he worked in the mines. He went to Penn State, earned his law degree – but he didn’t practice, didn’t go to some fancy place, he went right to work for the United Mine Workers, which he led for so many years.

Trumka served as president of the federation since 2009. In 1982, at age 33, he ran on a reform ticket and was elected the youngest president of the United Mine Workers of America (UMWA). There, he led one of the most successful strikes in recent American history against the Pittston Coal Company, which tried to avoid paying into an industry-wide health and pension fund. Trumka was elected AFL-CIO secretary-treasurer in 1995, and held that post until 2009, when he was elected president.

His commitment to improving life for working people began early. He grew up in the small coal-mining town of Nemacolin, Pennsylvania. Nearly all the men in his family, including his father and grandfather, were coal miners. Trumka followed them into the mines, working there as he attended Penn State and Villanova University Law School.

Acting AFL-CIO President Liz Shuler said, “Rich was a legend, from his early days as president of the United Mine Workers of America to his unparalleled leadership as the voice of America’s labor movement. Rich loved workers. And he knew there was nothing more powerful than workers standing together for a better life.

“If you ever watched Rich at a rally or on a picket line, his face would light up with excitement and hope,” she continued. “He never forgot who he was working for. He never forgot who he was fighting for. America’s working people were his guiding light for more than 50 years…. We are not done yet. Rich would never allow it. Now more than ever, we must come together, as one federation, to carry out the mission Rich devoted his life to.”

UMWA President Cecil Roberts said Trumka “was more than the leader of the American labor movement, he was an unequaled voice for the workers around the world…. Richard and I were partners in leadership at the UMWA for many years, but we were more than that. He was my brother, he was my friend, he was my confidant.”

American Federation of Teachers President Randi Weingarten stated, “Rich Trumka was our brother in the truest sense of the word. His sudden passing is a tremendous loss for the entire labor movement, and for working families across the country. From his first mining job in the late 1960s, to joining the staff of the United Mine Workers of America and eventually becoming president, to his fierce and courageous leadership of the AFL-CIO for more than a decade, Rich fought his entire life for dignity and respect for American workers. He practiced what he preached, and he brought the voices of working people to the forefront of our nation’s consciousness with deep humility and an abiding belief in the power of collective action. President Trumka was a beloved colleague and friend, and his legacy will endure for generations.”