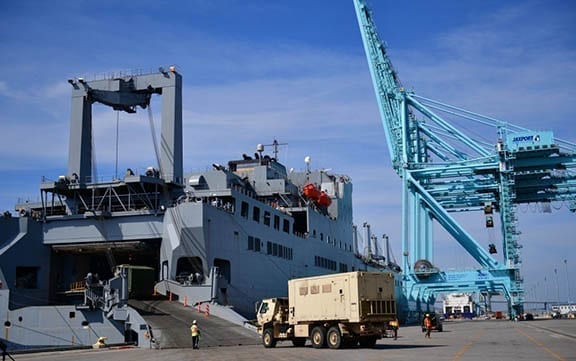 Conducted from March through June, Defender-Europe 21 was designed to build strategic and operational readiness and interoperability between U.S. and NATO allies and partners by testing America’s ability to move troops, cargo and vehicles overseas. The exercise involved some 30,000 U.S. troops (members of the National Guard and U.S. Army Reserve included) along with allied and partner forces from 27 nations.

The Bob Hope, a large, medium-speed, roll-on, roll-off ship (LMSR) operated by U.S. Marine Management, in early March sailed out of the Pacific northwest before loading in the Ports of Jacksonville, Florida, and Portsmouth, Virginia, on its way across the Atlantic to the Adriatic Sea in Durres, Albania. The vessel’s cargo comprised more than 700 pieces of Army light infantry brigade equipment including Humvees, trucks, and light artillery. The USNS Yuma, an expeditionary fast transport vessel crewed by members of the SIU Government Services Division, also participated in the exercise.

Once the Bob Hope and its cargo arrived in Europe at its predetermined location, crew members aboard the vessel and personnel from several other deployed military units took part in a Joint Logistics Over the Shore Operations (JLOTS) exercise. Such exercises test and hone the Army’s and Navy’s capabilities to conduct ship-to-shore logistics and open a strategic port to support surge forces and equipment. JLOTS maneuvers allow U.S. strategic sealift ships to anchor near coastlines and download combat equipment and forces for transport to shore when existing ports are inadequate or damaged, or if access is denied. JLOTS watercraft can also be used to reposition units and materials within a theater. 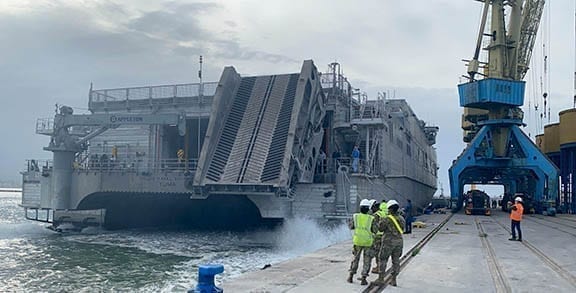 During this JLOTS exercise, the Bob Hope discharged more than 800 pieces of equipment using Navy floating causeway ferries and Army Logistics Support Vessels to deliver cargo to the shore. Equipment was also transported by the USNS Yuma and a British roll-on/roll-off ship to Zadar, Croatia, demonstrating distributed logistics as part of the JLOTS exercise. The Navy also used the Amphibious Bulk Liquid Transfer System to stream fuel from a barge to a tank on shore, the Army’s Fuel System Supply Point.

Personnel from the U.S Transportation Command (USTRANSCOM) also participated in the JLOTS, and the role they played was vital. Essentially, USTRANSCOM was tasked with assessing the capability and interoperability of the Army and Navy in delivering this critical capability to a geographic combatant commander.

“Our ability to integrate the Army and Navy for ship-to-shore logistics is essential, and JLOTS is one way we exercise and improve this capability,” said U.S. Army Gen. Stephen R. Lyons, commander of USTRANSCOM, in a command new release on Defender-Europe 21. “We must be ready to respond to crisis on a moment’s notice and project the Joint Force anywhere across the globe.”

With 85 percent of U.S. forces based in the United States, nearly 90 percent of military equipment is expected to deploy via sealift in a major conflict. JLOTS exercises test the Joint Force’s ability to move from the U.S. to various locations around the world and open a logistics hub to provide vital supplies, equipment, and forces to support military operations or humanitarian assistance during disaster relief missions.

“The strategic significance of exercising a port opening alongside our allies and partners in southeastern Europe and surging forces and equipment onward underscores USTRANSCOM’s mission to provide a large-scale response anywhere in the world, in order to assure our allies, deter our adversaries, and ensure our national leaders always have options,” added Lyons.