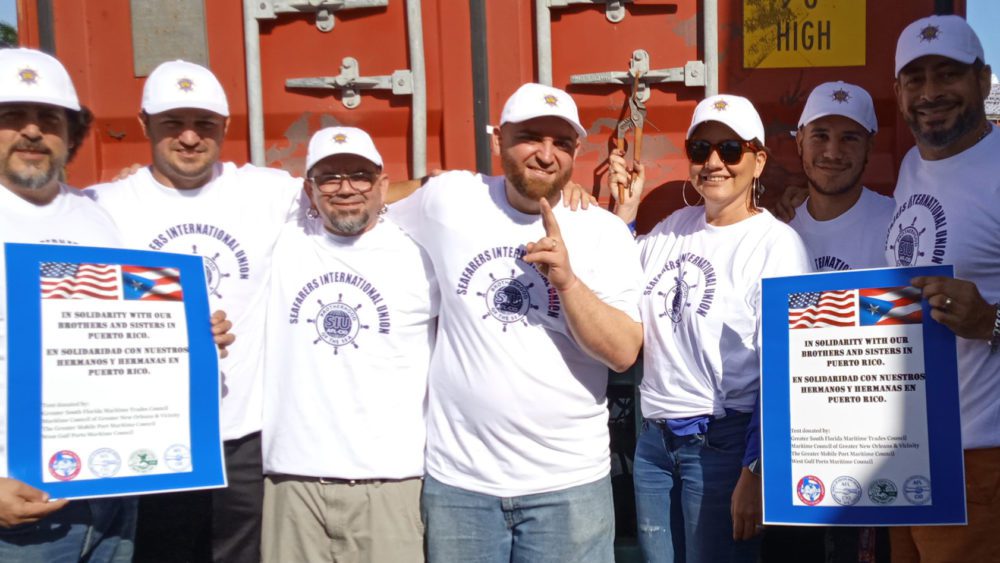 The SIU hasn’t let up in its efforts to provide relief supplies to Puerto Rico residents recovering from a series of earthquakes.

As previously reported, the union has teamed up with numerous other labor organizations, businesses including Jones Act vessel operators, and other supporters who are donating, transporting and distributing supplies in the commonwealth.

During a news conference at the SIU hall in San Juan, Puerto Rico, on March 2, SIU Port Agent Amancio Crespo stated, “As SIU President Michael Sacco has pointed out, our organization is committed to this relief effort for the long haul. We’ve already been working on it for months, and we’ll be here all the way.”

Crespo added, “Thank you to our fellow unions and to all the companies that are joining together to get the job done. This truly is a team effort and it wouldn’t be possible without all of you. I also want to say a special thank you to the many members of the Seafarers International Union who’ve stepped up and volunteered their time and effort to help our fellow citizens. You guys and gals are the greatest, and your commitment absolutely is not taken for granted.”

American Federation of Teachers (AFT) President Randi Weingarten also spoke at the press conference, where she thanked those involved in the relief effort and also pointed out that the needs remain significant.

The aforementioned earthquakes included a 6.4-magnitude event on Jan. 7 that resulted in severe infrastructure damage. Schools initially were closed for three weeks. Some of the territory’s 295,000 students then began returning to class outside of the damaged areas, but upwards of 600 of the island’s 856 schools were still closed as of early March. Some were awaiting safety inspections; others can’t reopen without major repairs. 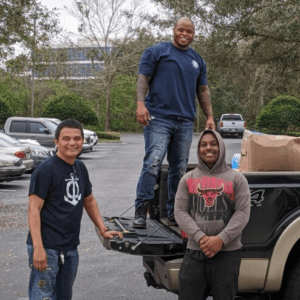 With that in mind, the labor-led relief effort has included a focus on event-style tents for use as temporary classrooms. Commitments have been secured for 120 such tents, mainly for use in Guayanilla, Guanica and the other heavily damaged municipalities.

The efforts specifically involving temporary classroom facilities are being coordinated with local and state government personnel.

Other relief items that either already have been donated or are in the works include various foods, school supplies, personal-size tents, portable battery-power lighting systems, folding tables and chairs, water filters, bottled water, mosquito nets and much more. All of the items have shipped on Jones Act vessels (pro bono). 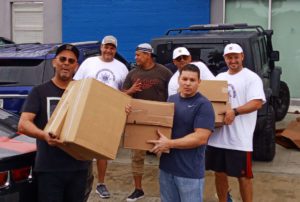 Among the organizations participating in the outreach are the SIU, the AFL-CIO, the Maritime Trades Department and its port councils, the AFT and its affiliates, AFSCME, the AMO, the ILA, the Teamsters, the Bakery Workers and its contracted employer Bimbo Bakeries, LIUNA, the UAW, the Steelworkers, Crowley Maritime, TOTE Maritime, SEACOR Holdings, National Shipping of America, and American Tent Co. (That’s a partial list, and any omissions are inadvertent.)

The relief effort hasn’t been limited to donated items. During a joint assessment by the AFL-CIO, AFT and the Asociación de Maestros de Puerto Rico (AMPR, part of the AFT), it became known that many local unions (among others) reported the need for mental health services for members and their families. As noted in a summary of the relief plan, “Hurricane Maria, the subsequent flooding, and now the earthquakes have left many Puerto Ricans deeply scarred and traumatized.”

In Puerto Rico, numerous SIU members have helped unload and then distribute the items to needy areas. In many cases, Seafarers are using their own personal vehicles, because larger ones cannot traverse the damaged roads in the southern parts of the territory.