Not every mariner sails for their whole life, instead choosing to spend only a few years at sea before pursuing a new career. But when those years are the final days of World War II, they leave memories that last a lifetime. 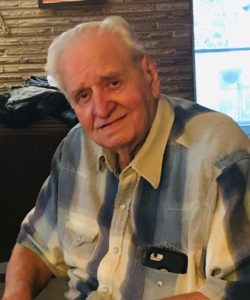 FOWT W. Bert Hatten, a former SIU member who served on cargo ships sailing into the Pacific Theater from 1942-1945, recently donated a collection of prints to the New Orleans hall in Harvey, Louisiana. The framed art depicts World War II-era merchant ships; the items were commissioned from artist Theodore C. Ewen by maritime underwriter Chubb & Son. Hatten, 92, was in the process of moving, and wanted the collection to have a proper home where others could view them.

“The set is awesome, and it’s such an honor that Bert thought to donate them to the hall,” said SIU Port Agent Chris Westbrook. “It was great to talk to him on the phone, and hear some of his sea stories from that era. The prints are up on the wall, and the feedback I’ve received from the members who have seen them is really positive.”

“I have very fond memories of my time in the SIU,” Hatten said. “As a youthful participant in the final stages of World War II, my first attraction to the SIU was, it offered me an opportunity to get into the action despite my youth, which caused my rejection by the Navy. Secondly, the SIU leadership in those days was strongly anti-communist, which was not the case with some others. Our leadership then included men like Harry Lundeberg and Paul Hall, both of whom were patriots and strong, honorable leaders.

“After the war ended, I debated for a while between sailing and seeking another career,” Hatten added. He eventually made his decision, heading to college before becoming a reporter for a local paper in Louisiana (from where he’d primarily sailed from), and launched a decades-long career in the newspaper industry. 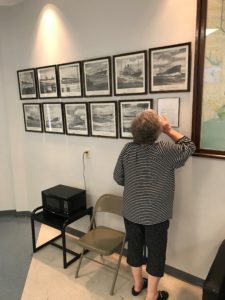 After sailing, he worked as the managing editor of two newspapers, the Monroe Morning World and The News-Star World, before starting and running his own newspaper, The Ouachita Citizen, from 1965 to 1986. He also found time to serve as the mayor of West Monroe, Louisiana, from 1966-1978. After that, he worked as an insurance underwriter until retirement. It’s been nearly 75 years since the end of World War II, but Hatten still remembers where he was when the war ended. “While en route to Japan as part of a supply convoy in September of 1945, our ship passed the USS Indianapolis, which was headed the opposite direction,” he recalled. “At the time, it was only notable because I had a friend serving aboard that ship, but of course now I know that the Indianapolis had just delivered the atomic bomb to be loaded onto the Enola Gay. Of course, this was before it was sunk by a Japanese torpedo. When we arrived in Tokyo Bay, we anchored right next to the USS Missouri, which served as MacArthur’s flagship. So that’s where we were when the Japanese surrendered.”

Hatten has three daughters, and currently lives with his youngest daughter in West Monroe.