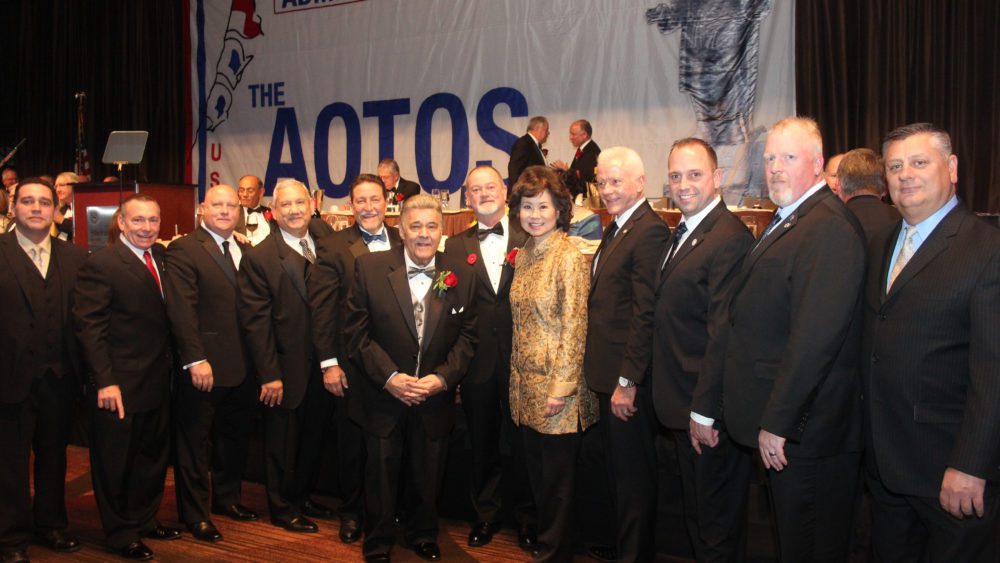 SIU President Michael Sacco introduced Secretary Chao at the ceremony. He described her as “one of the strongest champions our industry has ever known…. She not only understands American maritime, but also truly cares about the American worker. She is a tremendous leader and is universally respected, admired and trusted throughout our industry.”

Chao received the AOTOS Award based on her career-long commitment to the maritime industry. 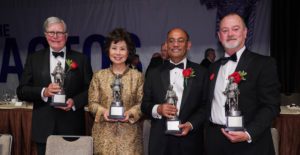 This year’s honorees are (from left) Joseph Pyne, chairman of the board of Kirby Corporation; U.S. Secretary of Transportation Elaine L. Chao; Anil Mathur, president and CEO of Alaska Tanker Company.; and Jim Given, president of the Seafarers International Union of Canada.

“I am honored to have my work over the years recognized by such a distinguished organization and audience,” she said. “I understand very well the sacrifices that merchant mariners experience. The men and women in this industry are heroes; I am proud of them and work hard to support them.”

“Secretary Elaine L. Chao has worked hard to advance the U.S. maritime industry,” said Maritime Administrator Mark Buzby. “Secretary Chao has been a staunch defender of the U.S.-flag merchant marine fleet. She has defended the budget of the Maritime Administration, and many of its policies in the interagency process. Today, we congratulate Secretary Chao on receiving the Admiral of the Ocean Sea Award which is recognized as one of the most prestigious awards in the maritime industry.”

This is Secretary Chao’s second Cabinet post. She served as U.S. Secretary of Labor from 2001-January 2009. She began her executive career in public service working on transportation and trade issues at the White House. She then served as Deputy Maritime Administrator; Chairman of the Federal Maritime Commission; and Deputy Secretary of the U.S. Department of Transportation.

Given has led the fight for tougher cabotage laws within his country. He also chairs a working group of the International Transport Workers’ Federation to support cabotage laws around the world.

Given is a third-generation Seafarer, having started his career in the deck department in 1979. After sailing for 13 years, he came ashore as a union dispatcher in Thorold. He held other posts within the union before becoming its president in 2013.

In accepting his award, Given informed those attending that the “Jones Act is the gold standard” of cabotage internationally. He said any weakening of the law – which states any cargo moved between two U.S. ports must be carried aboard U.S.-built, U.S.-owned and U.S.-flagged vessel with American crews – would have negative implications around the world.

“You who defend the Jones Act in the United States are the defenders of cabotage around the world,” Given added.

Mathur became president and CEO of SIU-contracted Alaska Tanker Company in 2001 after working for British Petroleum for 20 years in management, corporate planning and facilities engineering. He holds an MBA from the University of California at Berkeley and an MS in Engineering from the University of Tulsa. He is an alumnus of the Harvard Business School. Pyne started with Kirby in 1978 and climbed through its executive ranks, becoming a director in 1988. He retired in April 2018 but continues to serve Kirby’s chairman in a non-executive role. The United Seaman’s Service presented the first AOTOS Award in 1970. More than 80 maritime industry leaders have been recognized through the years.

Established in 1942, the United Seaman’s Service provides community services for the U.S. Merchant Marine, U.S. armed forces and mariners from around the world at its centers in Europe, Asia, Africa and in the Indian Ocean. It also oversees seagoing libraries for American vessels through its affiliate, the American Merchant Marine Library Association.