In announcing the presentations, MARAD noted, “The awards were given for the crew’s unprecedented rescue efforts in response to the horrific fire aboard the foreign-flag vessel M/V Sincerity Ace in the northern Pacific Ocean on Dec. 31, 2018.” 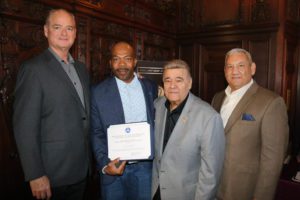 The Green Lake’s officers are represented by the MM&P and MEBA, respectively.

During last month’s event, Buzby stated, “Today, as we honor the crew of a great American ship, we again see the value of the Maritime Security Program to our country. The Green Lake was there to respond in the time-honored tradition of mariners coming to the aid of fellow mariners. This American-trained crew highlights the professionalism and valor of our nation’s mariners, whether conducting humanitarian aid missions or providing vital sustainment to the U.S. Armed Forces.”

The Sincerity Ace was a car carrier whose crew of 21 abandoned ship. When the Green Lake arrived on the scene, it encountered what MARAD described as “a daunting task – locating Sincerity Ace crew members floating in unforgiving seas spread out across several miles. The Green Lake fought 17- to 20-foot waves and turbulent winds, making lifesaving attempts even more dangerous and challenging. The rescue effort lasted 18 hours, with the Green Lake’s entire deck crew working tirelessly to get the survivors on board.”

The Gallant Ship Award dates back to an executive order issued by President Franklin D. Roosevelt during World War II to recognize excellence and bravery in merchant mariners. Between 1944 and 1994, only 41 ships received Gallant Ship status, with the last award presented in 1994.

The award is presented “to any United States vessel or to any foreign vessel (merchant, Coast Guard, Navy, or other), the crew of that ship, or other individuals or organizations participating in outstanding or gallant action in marine disasters or other emergencies for the purpose of saving life or property.”

Ships and crews receiving Gallant Ship status must have encountered substantial danger during rescue and lifesaving efforts while demonstrating efficiency, discipline, and expertise in conducting such operations.

The Merchant Marine Medal for Outstanding Achievement is awarded to U.S. Merchant Mariners who have participated in an act or operation of humanitarian nature directly aiding an individual or group of individuals.

As noted by Buzby, the Green Lake is part of the Maritime Security Program (MSP) fleet. The program helps maintain a fleet of militarily useful, civilian-crewed, privately operated ships that are available to the Department of Defense whenever needed.