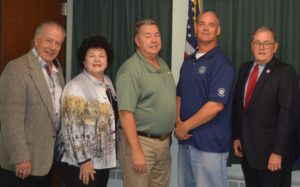 Peter Demchuk is now at the helm of the Maritime Trades Department’s (MTD) Baltimore Port Maritime Council (PMC). The IBEW Local 24 business manager succeeds Dion Guthrie, who stepped down Oct. 16 after 13 years as the PMC president.

Demchuk and his fellow officers – Vice President Guthrie and Secretary- Treasurer John Hoskins (who is the SIU’s Baltimore port agent) – were sworn in by MTD Executive Secretary-Treasurer Daniel Duncan at the council’s meeting in mid-October.

The IBEW official told delegates he looks forward to his new position. He said he plans to work closely with the Maryland State and D.C. AFL-CIO (whose president, Donna Edwards, attended) and the Metro Baltimore AFL-CIO on projects affecting all union workers in the city and its surrounding communities. He looks forward to growing the port council, he said.

Additionally, Demchuk outlined a program to promote the hard-working men and women within the Port of Baltimore community. He noted the advent of offshore wind turbines and wants to make sure union members from the maritime trades, metal trades and building trades are involved. In addition, he thanked Guthrie for his decades of service to the council.

The Baltimore PMC received its charter in 1952.

The MTD is a constitutionally mandated department of the AFL-CIO and was formed in 1946. The MTD’s network of 21 port maritime councils has given maritime workers a strong grassroots presence in port and coastal cities all across the nation. Representing a wide array of workers, the councils have provided the department’s 23 affiliates (who collectively represent approximately five million members) a mechanism to pool their resources on a wide range of issues and projects.