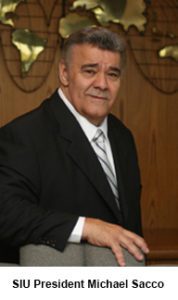 Seafarers may recall that it was only a few months ago when I began one of these columns by congratulating them for a great, typically professional response to a sudden flurry of vessel activations.

Turns out those activations were just a warmup.

As reported elsewhere in this edition, our members recently stepped up and helped crew 33 U.S. military support ships for a widespread exercise beginning in mid-September. This was not a small task, but Seafarers came through with flying colors. So did our officials in the hiring halls and at the manpower office. Overall, this is believed to have been the largest activation since the Persian Gulf War.

Although in some ways this may be viewed as “just doing our jobs,” the sheer scope of the activations warrants a pat on the back. I’m proud of our members for answering the call so promptly and so thoroughly. Particularly in light of the fact that it really wasn’t 100 percent certain these were exercises (the activations coincided with some interesting happenings overseas), you once again proved that you’re America’s fourth arm of defense.

I know we’ll remain at the ready, but in the meantime, congratulations to all concerned on a job well done.

Speaking of the U.S. Merchant Marine’s vital role in national defense, the U.S. House of Representatives has unanimously passed legislation that would honor the remaining mariners from World War II with a Congressional Gold Medal.

The Senate now has an excellent opportunity to recognize these members of the Greatest Generation.

For those unfamiliar with the history, the U.S. Merchant Marine of World War II truly made the difference between victory and defeat. The SIU was there from the beginning – even before the United States officially entered the war, in fact. The SIU-crewed Robin Moor was sunk by a German submarine in May 1941.

More than 1,200 of our members lost their lives in the war. They were part of a larger group that suffered a higher casualty rate than any of the armed services.

Unfortunately, we’ve always had to scrap for recognition and acknowledgement. But, we’ve proven it can be done. We proved it in 1988 with the long-overdue awarding of veterans’ status for World War II mariners, and we proved it again 10 years later with the proper extension of the cutoff date for that recognition.

This simple but powerful gesture would be fitting, satisfying, and deeply appreciated by the mariners and their families. The SIU stands behind them 100 percent.

Whether you navigated to this column online or in print, you couldn’t have missed our coverage of the recent ceremony in Baltimore where three newly reflagged ships were named (they’re joining the American Roll-on Roll-off Carrier fleet). The day itself was inspirational, and I particularly enjoyed hearing so many compliments about our rank-and-file members.

Gaining new tonnage under the American flag is never a given, whether it’s for the Jones Act trade or international voyages. It takes significant investment and commitment – and those steps are based in part on the availability of reliable, well-trained mariners, including SIU members. Our industry faces plenty of challenges, but we’re also making substantial progress. Ceremonies like the ARC event reinforce my confidence that our best days are still ahead.