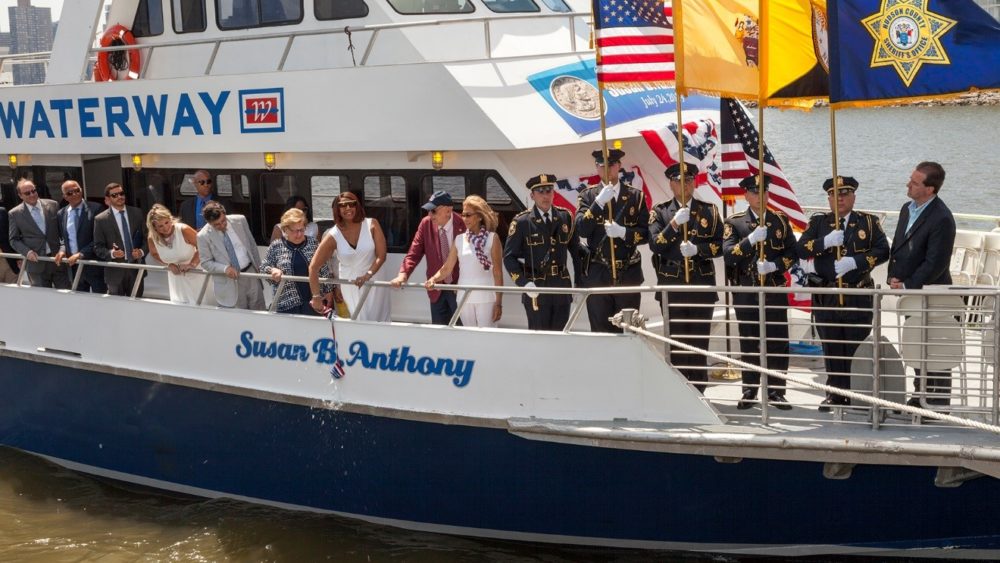 SIU-contracted NY Waterway has added to its fleet of safe, reliable passenger ferries.

SIU Patrolman Ray Henderson attended the gathering, which he described as small but upbeat. “It was a great ceremony – a sunny day on the river,” Henderson said. “The lieutenant governor gave a wonderful speech, as did (NY Waterway President) Arthur Imperatore. The members are happy.” 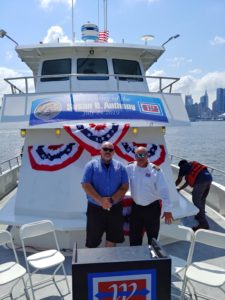 Deckhand Steven Matos (left) and Capt. Frank Virginia are pictured aboard the Susan B. Anthony.

Capt. Frank Virginia and Deckhand Steven Matos, assigned to the new addition, also were there for the christening, which took place at the Port Imperial Ferry Terminal.

“It is with great honor that I join NY Waterway to dedicate this boat to one of the most consequential heroes in U.S. history, Susan B. Anthony,” Oliver said. “She was often seen as an outlier and a fighter, which are the traits of every transformative figure that I admire. The roots of her activism started at a very young age and continue to inspire me and so many others in our contemporary pursuit for social equity in New Jersey and beyond.”

“I am honored to participate in NY Waterway’s boat dedication to one of my heroines, Susan B. Anthony, who relentlessly crusaded for the woman’s right to vote,” said New Jersey Senate Majority Leader Loretta Weinberg. “She was a true social reformer, activist and fighter for social equality, which are many of the same issues we continue to fight for today. Her spirit will be a guiding light to this vessel and I know somewhere she is looking down on this dedication with pride and satisfaction as we welcome her namesake into the ferry fleet.”

The Susan B. Anthony was built in 2002 by Yank Marine in Tuckahoe, New Jersey, where the NY Waterway ferries Molly Pitcher and Betsy Ross also were built. These are the first ferry b

oats built in New Jersey in memory. NY Waterway has three other boats under construction at Yank Marine.

Originally named the Suzie Girl, the Susan B. Anthony was used as a party fishing boat on the Jersey Shore. NY Waterway has completely restored it, returning her to as-new condition, with a luxury interior that’s standard on all NY Waterway ferries. She is 65 feet long and 20 feet wide, capable of carrying 130 passengers at 24 knots, and powered by two American-made Caterpillar engines.

In announcing the christening, the company noted that the Susan B. Anthony “will be used on Hudson River crossings between New Jersey and Manhattan. She also will join NY Waterway’s proud tradition of providing emergency service when other transit systems are disrupted by weather or road and track repairs. Since 1986, NY Waterway ferries also have conducted emergency evacuations, bringing hundreds of thousands of New Jersey residents home safely after 9/11, the 2003 blackout and other disasters. These ferries also have rescued more than 300 people from various accidents including 143 people rescued from Flight 1549 in the Miracle on the Hudson, the most successful rescue in aviation history.” 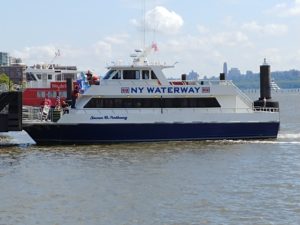 SIU-crewed NY Waterway ferries are considered by many as the most reliable transit system in the New York metro area. They carry upwards of 32,000 or more passengers daily and maintain an on-time performance rate greater than 99 percent. The boats serve 20-plus routes between New Jersey and Manhattan.