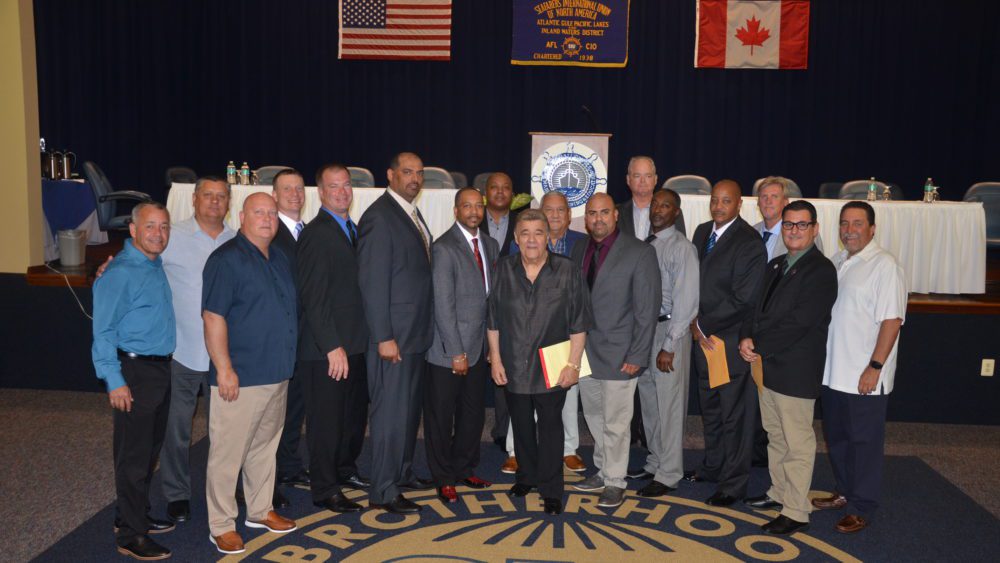 Bosuns Find a Home with SIU

Members of the union’s newest class of recertified bosuns have diverse backgrounds, but they share a strongly held belief in the attractive career opportunities available with the SIU.

That message came through time after time, often poignantly, when 10 Seafarers graduated from the recertification course Aug. 5 in Piney Point, Maryland. In keeping with tradition, they gave speeches near the end of the monthly membership meeting; their remarks were well-received by fellow upgraders, Paul Hall Center apprentices, family members and union officials.

The class includes reviews of U.S. Coast Guard regulations, updates on the latest PHC training, hands-on exercises with simulators, and briefings on the collective bargaining process. It also features a town hall-style session with apprentices, meetings with representatives from various union and Seafarers Plans departments, and a trip to AFLCIO headquarters in Washington, D.C., among other subjects.

Following are some highlights of the graduation speeches, in chronological order.

A 20-year Seafarer, Strand kicked off his remarks by thanking SIU officials “for all their hard work protecting our jobs. Because of you, I am able to have a successful career to support my family.” He also praised the PHC instructors and staff.

“The leadership skills and union education I have learned in these last couple weeks was top notch,” said Strand, who sails from Tacoma, Washington. “These skills will be carried over to every ship I sail on.”

Like his classmates, he urged fellow members to promote the Jones Act and donate to SPAD, the union’s voluntary political action fund. “This is what keeps our jobs safe,” he stated.

Strand added, “I would not be where I am today if it wasn’t for the old-timers passing their seamanship down to me. All that knowledge has made me a better sailor, and I thank you.”

When he signed on with the SIU 24 years ago, Johnson had a five-year plan: “get in, make some money, buy a house and then get a ‘normal’ job,” he said. “Well, I’m in the twenty-fourth year of my five-year plan. I keep sailing because this is my normal. It’s a great career; I’ve been able to provide for my wife and two boys. I’ve seen a lot of really interesting places and really cool things.”

Johnson encouraged all Seafarers to take advantage of the PHC. He also called the recertification class “a real eye-opening experience. We met a lot of individuals who are dedicated to keeping the American flag flying on ships. We learned about their everyday struggle to defend the Jones Act. It is truly an endless battle. It was good to see our SPAD money hard at work. So please, contribute to SPAD, because our jobs depend on it,” said Johnson, who sails from Jacksonville, Florida.

There’s no mystery as where Saleh found his influence for joining the union. “I joined when I was 19 years old, after I graduated from high school in 1994,” he recalled. “The reason I joined the SIU is because my father is an SIU member.”

Saleh, who sails from Algonac, Michigan, doesn’t regret the decision. “The SIU provides great contracts, and they also fight for us for better wages, reasonable hours and safer working conditions,” he said. “The union ensures benefits for me and my family.”

He said that the class trips to SIU headquarters and to D.C. provided valuable insights about how the union, the Seafarers Plans, and the Maritime Trades Department (MTD) operate. In that vein, he encouraged all members to donate to SPAD and support the Jones Act.

Saleh concluded with “special thanks” to SIU President Michael Sacco and other officials “for the effort they put in to keep the SIU strong. This has been a wonderful experience.”

Another longtime member, Webb joined the union in 1986 in New Orleans (he now sails from Fort Lauderdale, Florida).

“I didn’t know what I wanted to do (for a career), and the union gave me direction,” Webb said. “The union pretty much saved my life.” He said the recertification course will help him do an even better job aboard ship, and stressed that the officials “need our help to protect our industry and jobs. We need to always do our best job, we need to upgrade our skills, and we need to donate to SPAD.”

Currently sailing from Jersey City, New Jersey, O’Shaughnessy said the SIU “has been important in my life. It has given me stable income, time to enjoy myself, and benefits. I have enough (sea) time to receive a pension, and let me tell you, that’s a good feeling.”

He thanked the PHC instructors and SIU officials for their work, and underscored the union’s “commitment to protecting our jobs. During my visits to Camp Springs and Washington, I saw firsthand their dedication to the union and its members, and how hard the battle is for survival. We as members need to donate to SPAD so our union officials who represent us have the support they need for their continuous battle on Capitol Hill – and so we in turn can support ourselves and our families.”

O’Shaughnessy added, “My time here has been enjoyable. This is a beautiful school, and I was treated with respect for all my years of service.”

The other class member who sails from Jersey City, Smith noted, “Twenty-four years ago, I walked through these doors as a trainee – a boy from New York with no direction. Now, I stand here as a man that gives direction.”

He said he first applied for the recertification class 15 years ago, but things worked out for the best.

“Looking back, I was not ready then,” Smith stated. “Now, I stand here humble, with more understanding, more knowledge and more patience.”

He said the class was worthwhile and summarized the work of a bosun as “not about knowing how to tie every knot in the book. It’s about people management, conflict resolution, promoting safety and morale-boosting.”

Smith thanked his family for their unwavering support “and being so understanding of my absences through holidays, birthdays and all the special events that I could not attend.” Some of those family members traveled hundreds of miles to attend the graduation ceremony; his first bosun, Brian Isenstadt, and other old shipmates also attended.

Describing the union as “a well-oiled machine,” Johnson said one thing that stood out in the class was “learning how hard the leadership works to provide jobs, protect the Jones Act and protect the livelihoods of so many people. They are at the forefront of the maritime industry to ensure that we continue to have jobs and a strong union with a good pension plan and a good health benefits plan.”

He thanked the school’s instructors and said the facility has “a good atmosphere and great people.”

Johnson, who sails from Mobile, Alabama, noted that he has been a mariner for 33 years, the last 29 with the SIU. He has sailed around the world twice.

Before becoming a Seafarer, Lima started sailing with the National Maritime Union’s (NMU) division for civil-service mariners in 1987. “When we merged with the SIU (in 2001), things got better,” he recalled.

“This union has always supplied me and many others with good-paying jobs throughout the years,” he said.

Lima said the leadership course in particular will help him “be a little more tactful without yelling so much.”

He concluded by expressing confidence in the union’s officials.

“There’s a lot of people out there who would like to see this union fail and the Jones Act disappear, for their own selfish gain and greed,” Lima said. “Luckily, we have a whole slew of dedicated men and women that work hard for us to keep this union strong and proud for many, many years to come.”

“The union has played a very important role in my life,” said Webb, who joined the SIU in 1989 and who sails from Oakland, California. “It took me off the streets and kept me away from the people I’d been hanging out with. They either went to jail or were murdered. I believe God protected me through the trainee program here at Piney Point.”

Webb said the initial training “taught me how to become a man – responsible, disciplined, and a professional U.S. Merchant Mariner.”

He thanked Sacco and SIU Executive Vice President Augie Tellez “for being concerned and passionate about our wellbeing. I also thank the instructors and staff at the school for their hard work.”

Webb said the class helped him realize the vital importance of grassroots political action, including SPAD.

Another part of the graduation tradition is enduring the playful suspense about who’ll be the last speaker – and in this case, Rosado had the honors.

“I’ve had the pleasure of travelling the world, meeting all kinds of people and cultures and seeing things people pay good money to see on cruise ships. The difference is, I got paid to see those places,” said Rosado, whose home port is Santurce, Puerto Rico.

He continued, “Being part of this SIU family has made me the man I am today. Because of the SIU, I’ve been able to provide for my family and to have the lifestyle I have today – and I have a pretty good one.”

“It’s hard work, what these people do,” he stated. “Our leaders need the resources to make it happen.”