In an online post applauding the selections, the union noted, “Secretary Chao is a tireless, unwavering advocate of the American maritime industry. Her effectiveness and commitment to our industry are unsurpassed. The SIU is proud and humbled to respectfully count her as a friend.”

SIU President Michael Sacco described Chao as “someone who not only understands our industry, but also truly cares about the American worker. She is a tremendous leader and is universally respected, admired and trusted throughout our industry.” 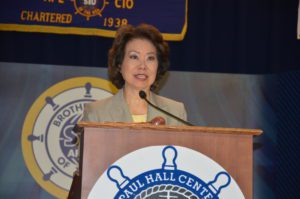 Chao’s support for American-flag shipping and U.S. mariners is nothing new. Beginning in 1986, when she became Deputy Administrator of the U.S. Maritime Administration, she has consistently advanced programs that boost the industry. This also held true during her service as Chairwoman of the Federal Maritime Commission (1988-89), as Deputy Secretary of Transportation beginning in 1989, and as Secretary of Labor from 2001-2009.

The SIU further stated, “We are honored to have hosted Secretary Chao at our affiliated school in Piney Point, Maryland, in 2002, 2005 and 2017. We deeply appreciated her keynote remarks in October 2003 when the late SIU President Paul Hall was inducted to the DOL Hall of Fame. And we enjoyed celebrating together in June 2005 when she christened the Pride of America in New York City. More recently, we were heartened when one of her first official acts as Transportation Secretary was delivering keynote remarks in Beaumont, Texas, as the car carrier Liberty Passion formally reflagged under the Stars and Stripes in March 2017. Later that same month, SIU President Sacco was a featured speaker at a gathering in the nation’s capital that served as both a formal welcoming of Secretary Chao and an observance of the department’s 50th anniversary.”

Sacco added, “There is nobody better qualified to be Secretary of Transportation than Elaine Chao, as she has demonstrated since day one. Throughout her time in government, she has been a steadfast friend to the SIU and to maritime labor. She has stood up to defend the Jones Act, the Maritime Security Program, cargo preference and the other key programs that keep our industry alive. She understands the importance of providing jobs to America’s working families, and she has seen firsthand the value of the United States Merchant Marine to our nation’s defense and prosperity.”

AMP’s other selection – the U.S. Merchant Marine of World War II – hits home with the union. More than 1,200 SIU members lost their lives to wartime service; their names are individually memorialized on a large plaque at the union’s affiliated school in Piney Point, Maryland.

Overall, the U.S. Merchant Marine of World War II proved nothing short of indispensable for the Allies. As noted by AMP in its kickoff of the American Maritime Heroes campaign, “Almost 250,000 merchant mariners transported tens of millions of tons of war supplies and more than seven million servicemen under the most challenging circumstances imaginable. As a result, they suffered the highest casualty rate of any service during World War II, with one mariner out of every 26 lost. Often defenseless against enemy vessels, these merchant mariners continued to sustain the war effort. A total of 8,241 merchant mariners died in World War II, and many others were captured and became prisoners of war. Today only about 2,000 remain.”

The late SIU historian John Bunker wrote in 1951, “Before any of the nation’s armed services were ready for all-out duty in World War II, the merchant marine and the men who manned it were on the front lines of global action. No executive manifestos; no formal enlistment, no testings of loyalty or pledges of devotion to their country’s service were required to put SIU crews into action or prove their willingness to face danger – and death.”

For more information on the campaign, which will culminate on the 100th anniversary of the Jones Act becoming law, visit https://americanmaritimeheroes.com/