Apprentices Randy Slue and Christian Kalinowski recently experienced a unique period of training at the SIU-affiliated Paul Hall Center for Maritime Training and Education, when their fathers arrived at the school to work alongside them.

QMED Randy Slue and SIU hawsepiper Third Mate Christopher Kalinowski (currently a member of the Seafarers-affiliated American Maritime Officers union) joined their sons aboard the Freedom Star – the school’s dedicated training ship – for a fast cruise, which is defined by the U.S. Navy as “a simulated underway period that prepares the crew for life at sea.” The four mariners used the time aboard the ship well, as both an opportunity to learn and a chance to visit with family.

“Because we weren’t able to go out on the [planned voyage], we did a lot more instruction, line handling and such,” said Christopher. “At night, [my son] was on watch, so I spent that with him. And then we bunked together, so we caught up during those times as well. I was very fortunate for this time with him.” 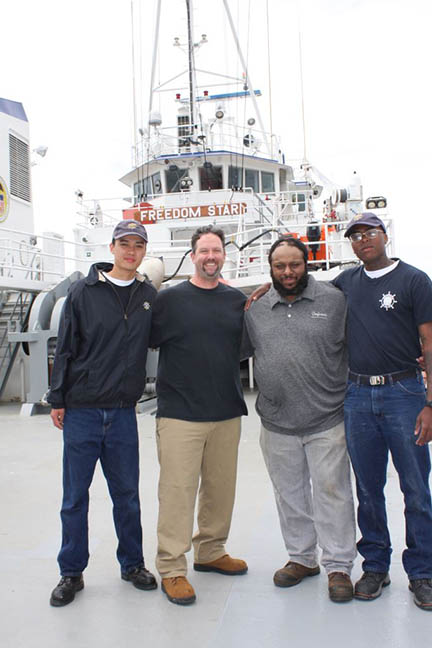 Randy was also thankful for the experience, saying, “I tried to give him (his son) a little advice on things to look out for on the job, stuff like that. We caught up as we worked on the ship, made sure he was getting along at the school and all that. It was nice to spend some time with him.” The sons also praised the experience of working aboard the training vessel, remarking on the value of learning on a real ship as opposed to exclusively in classrooms and on simulators. Christian said, “Being able to feel fresh air was a bonus. Feeling how hot an engine actually is was cool, it’s not really reflected in the simulators. It was much more realistic working aboard the Freedom Star.”

Both second-generation mariners spoke of their fathers as inspirations for their career decisions. The younger Randy explained his reasons for following in his father’s footsteps, saying, “The stories he used to tell me when he got home really got me excited. He would tell me about his trips to Japan, and throughout Europe and all kinds of other countries. He showed me pictures and stuff from his travels, and told me what a great career it would be.”

His father, who joined the SIU in 2003, remarked on his son’s path to becoming a mariner: “I’m pretty excited that he decided to do this. He made the decision all on his own, and I’m proud of him. The only thing I pushed him towards was getting a career instead of a job, something long-term. He came up with the plan, and he’s followed through. I was supportive of him no matter what, obviously, but he came to the decision on his own.”

Christian was similarly inspired by his father’s career, and also hadn’t been pushed towards a life on the water by his father. Christopher praised his son’s decision, saying, “I’m extremely proud of him. He has become a man of great work ethic, and it’s almost comical how identical his footsteps are to mine. I was in lifeboat class number 500 as a trainee, and he’s following right behind me.”

The older mariners also observed the many improvements to the school since they first trained at the facility in Piney Point, Maryland.

“I was impressed with the Freedom Star,” said Christopher. “It’s a functional, sea-based platform, and when they do go out on a cruise, the things the trainees can do out there, they really won’t be able to do until much later in their career. It’s a great platform for teaching…. Not only did I get a look at the curriculum on the Freedom Star, I got to peek in at the simulators, and they are really something. It’s world’s different from when I trained here.”

Randy was also impressed by the training vessel: “I think it’s awesome,” he said. “I think that it is a great opportunity to get hands-on experience with the instructors. You can get ignored sometimes when you’re working out at sea, and not receive the best on-the-job training, but on the Freedom Star, you really get a chance to get that quality training time on a ship.”

The apprentices reflected on the advice their fathers had given them in preparation for attending the school, and how that advice had compared to the current facility and curriculums. “Everything that he really told me about it was to prepare me for the lifestyle and environment,” said Randy. “I knew it was going to be military-like, and I was ready for that, so I wasn’t too surprised. He prepared me before I even applied, while I was still in high school, so I was mentally ready for the training here. What stuck with me was that he said to stay focused, and not worry about what other people say. Know what you’re there for, and work hard to achieve your goals.”

Christian recalled his father’s advice to him: “He told me to keep your head low, and said that people will try to shake you up, but just work hard and you’ll get through. He was here in the ’90s, class 500, but my dad was right on. It’s not as crazy as he said it was, but it’s certainly changed over the years. He had prepared me for barracks and spigot showers, but it’s way nicer than that nowadays. A lot has changed here since the ’90s.”

Both apprentices emphasized their excitement to finish their training and travel the world. Randy expressed his desire to upgrade his skills and climb the ladder to third engineer, whereas Christian’s plan includes upgrading his deck department skills while sailing on as many different types of vessels as he can.

“I’d really love to travel with my pops on a ship, if we can get on a ship together,” said Randy. “He’s really taught me a lot, even in the short time we worked together onboard the Freedom Star. I’ll always appreciate this time with him.”