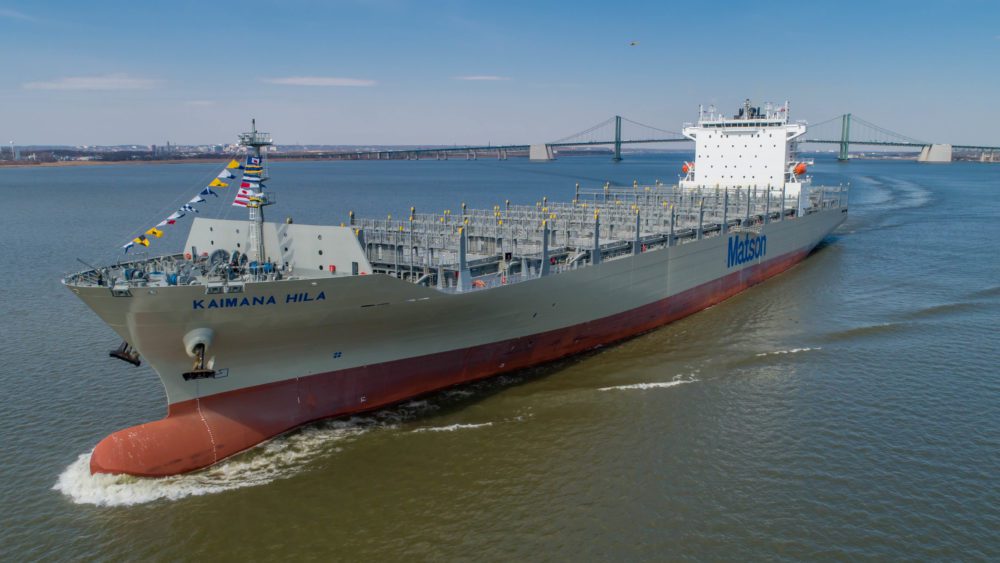 SIU-contracted Matson took delivery of the second of two Aloha Class containerships, the Kaimana Hila, on March 28. The Jones Act vessel was built by union members at Philly Shipyard.

Kaimana Hila is a Hawaiian transliteration for “Diamond Head,” the name of Hawaii’s iconic landmark crater near Waikiki Beach.

The new vessel is the sister ship to the Daniel K. Inouye, which was christened in June 2018 and went into service in November 2018.

The two vessels, at 850 feet long and 50,794 DWT, are the largest containerships ever built in a U.S. shipyard. Though bigger, the ships are also designed to accommodate future needs by being able to navigate safely into some of Hawaii’s smaller ports. Steinar Nerbovik, Philly Shipyard president and CEO, stated, “Matson is a first-class customer and on behalf of all of the men and women of the shipyard, we thank them for their trust and confidence in us. By all measures, Kaimana Hila will be another wonderful addition to Matson’s fleet, servicing the containership trade between the U.S. West Coast and Hawaii.”

The two ships are the first of four new vessels that Matson will put into its Hawaii service during the next 18 months. Kaimana Hila is the 30th vessel built at Philly Shipyard in the company’s 20-year history. “This is a proud day for everyone at Matson,” said Matt Cox, the company’s chairman and CEO, during a ceremony at the shipyard. “Daniel K. Inouye has performed well in its first four months of service, and we are excited to have Kaimana Hila joining it soon. These new vessels herald the beginning of a new era in our Hawaii service and will allow us to serve our customers better than ever for decades to come.”

U.S. Congresswoman Tulsi Gabbard (D-Hawaii) officially christened the vessel by breaking a ceremonial bottle of champagne against the ship’s navigation bridge superstructure on March 9. The ceremony was attended by approximately 70 representatives of Matson and PSI.

When the first vessel in the class was christened, Maritime Administrator Mark Buzby spoke at the ceremony, saying, “America has a proud maritime history, but it has never been just about ships and ports. To me it’s more about the American mariner; the men and women who have advanced the American way of life by serving at sea, and the men and women of the U.S. Merchant Marine. They are always among the first called to action to support and sustain our armed forces in national and international crises. Those same mariners will breathe life into this new ship and sail her confidently and competently for years to come.”