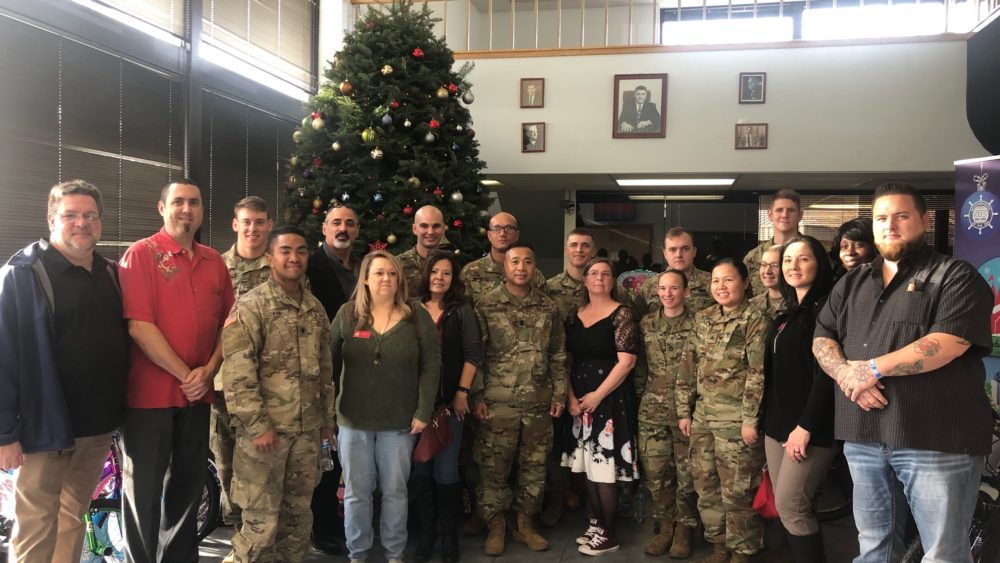 Holiday traditions may vary from home to home, but for 12 straight years, Seafarers in the Pacific Northwest have shared an especially meaningful one.

Specifically, the SIU has participated in Santa’s Castle, a holiday toy drive benefiting U.S. military families (mostly E-4 and below) from Joint Base Lewis-McChord (JBLM), Washington, as well as other bases. The union also hosts a related luncheon at the hiring hall in Tacoma, Washington, featuring guests from the Army and from the organization that runs Santa’s Castle. 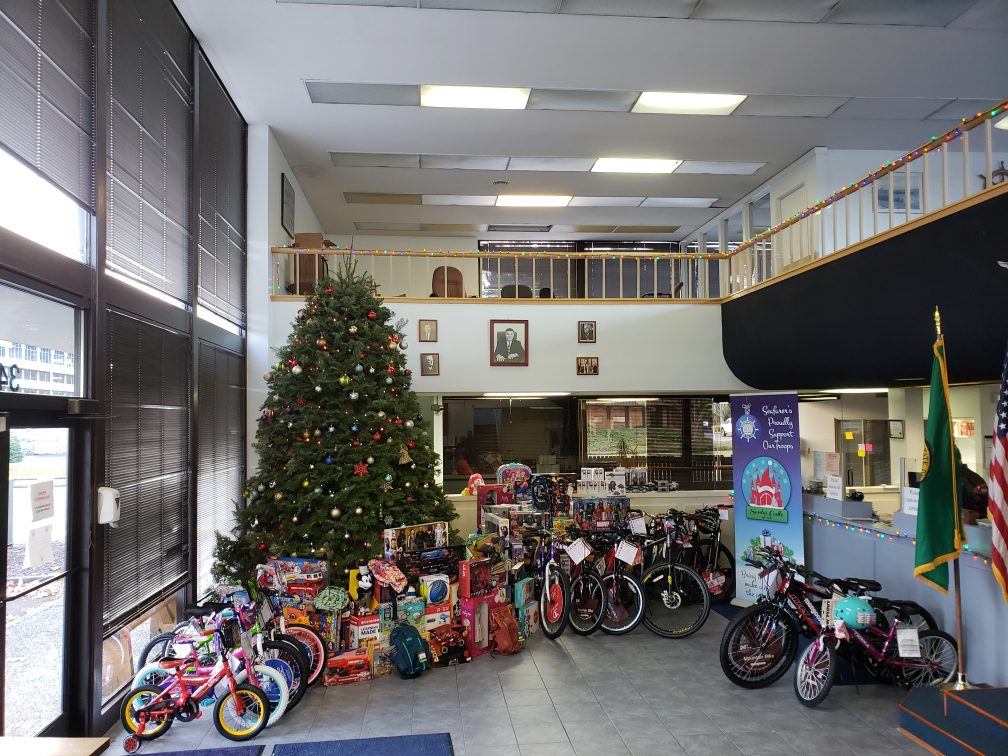 Some of the donated items are shown in the hiring hall

During the recent winter holiday season, SIU members – joined by generous executives from Seafarers-contracted companies – donated approximately $10,000 worth of gifts. The goodies included bicycles, smart watches, gaming headsets, sporting goods, American Girl dolls and much more. Teaming up with the members and making their own respective donations were Lee Egland of Crowley, Melissa Serridge on behalf of TOTE, and Dan Morrison of Harley Marine.

During remarks at the luncheon on Dec. 13, Vincenzo – an Army veteran – emphasized the important, respectful connections between the U.S. Merchant Marine and the armed forces.

“A lot of our work is on military support ships, and many SIU members are veterans, so we welcome this yearly chance to give back to our war fighters, peace keepers and our partners with respect to national, economic and homeland security,” Vincenzo said. “The relationship between the U.S. Military and the U.S. Merchant Marine dates back to the founding days of our country, and it’s a longstanding tradition of which we can all be proud.”

Heartfelt comments from SIU members who donated to the 2018 toy drive left no doubt about their genuine enthusiasm for the yearly endeavor.

“I think it’s really great,” said Recertified Steward Dennis Skretta, a Navy veteran who helped serve food at the luncheon and who has donated to the program every year. “It’s a very good thing and everybody seems to appreciate it. Seeing the military personnel at the Christmas party is always something to look forward to, and the donations are going to kids that need them.”

Chief Cook Ingra Maddox said the most recent Santa’s Castle outreach “went well. Our family is military and I thought it would be something nice to do, kind of say thanks. Our soldiers deserve help when they need it. It was nice to meet some of the people from our installation at JBLM, and I’m really proud of our union and glad I had the chance to join.”

AB Michael Bell stated, “I think it went great. When you walk in there and see all those toys, it really brings a good feeling, knowing the members are doing something for somebody else. I really enjoy doing it. We didn’t have a lot when I was growing up; myself, and I know, a lot of the other guys like to make sure kids have a good Christmas – have at least one thing under the tree.”

“I take my hat off to them,” Bell said. “They all do a great job getting this thing going and keeping it going. They deserve an ‘attaboy’ because they’re the driving force behind it. It’s one of the highlights of the entire year, and I think a lot of people look forward to it every year. You see a lot of smiles.” 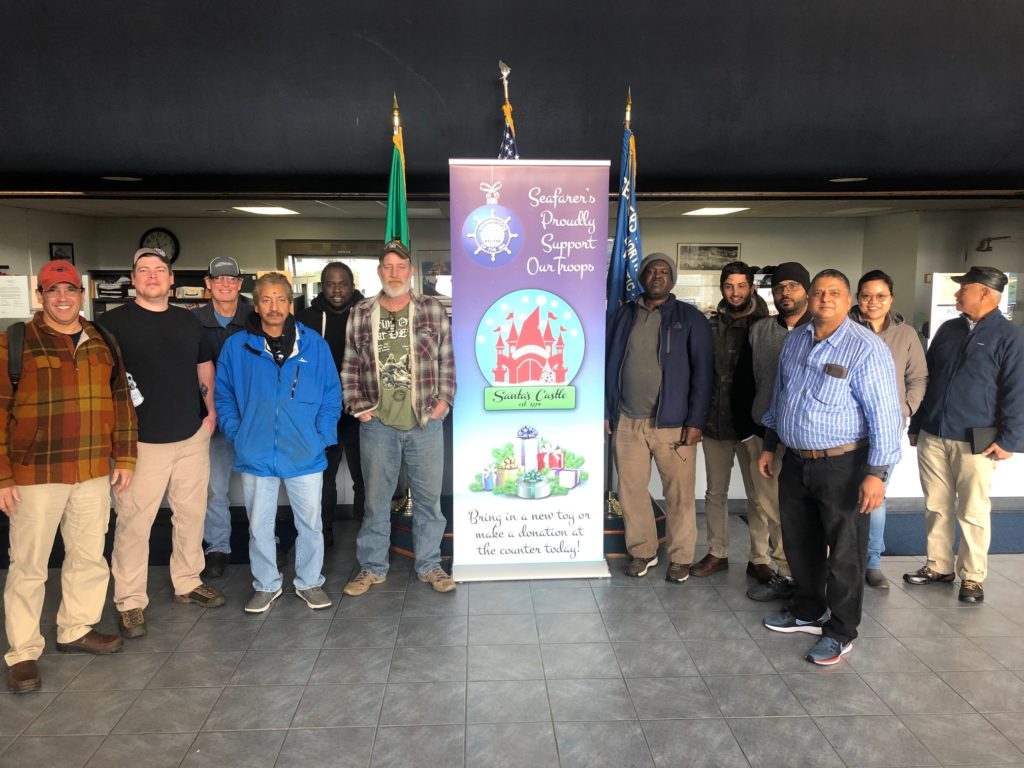 “I remember as a young PFC at Fort Riley, Kansas, home of the Big Red One (1st Infantry Division), an older gentleman toured the motor pool where I was working on an M577 (an armored vehicle). It was routine maintenance. The man thanked me for my service, but I did not feel that I had earned his thanks. Today so many years later, I still don’t – but today I understand his need to express his thanks and the genuine gratitude that he must have felt that day. And quite frankly, all these years later it is clear that his thanks were not necessarily or only about me but something much bigger and what I stood for, and still stand for today. It is an honor to be trusted with the capacity as your port agent to organize and advocate for this toy drive with the help of so many. You are the ones who even make this possible, and your generosity speaks for itself year after year.”

Shelly Hinzman, president of Santa’s Castle, said, “Our season went great. I don’t have final numbers, but we did 850 to 900 families. Seafarers were a big part of that, because the donations that we receive from them – really, they’re awesome donations. We put them to good use. We always love going to the Seafarers luncheon, too; it’s a highlight of our season. They’ve always been great supporters and we’ve always felt very welcome every time we go. I’m not exaggerating – we just love them.”

Santa’s Castle is a private 501(c)(3) organization. According to their website, participating service members are identified “by their chain of command – commander, chaplain, 1SG and above – and referred to the program. Once accepted, the service member is scheduled for a shopping appointment where they come to Santa’s Castle to select gifts for their child or children.”