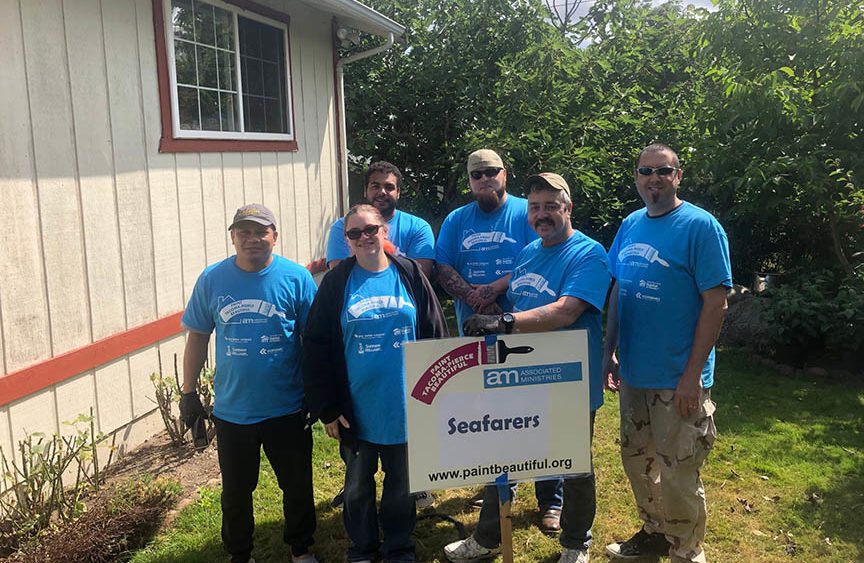 SIU members in the Pacific Northwest show no signs of letting up in their efforts to give back to the community.

Most recently, SIU personnel teamed up for the union’s annual participation in Paint Tacoma-Pierce Beautiful, a regional philanthropic project that began in 1985. The union has been active with the program (typically referred to as Paint Tacoma) for 13 straight years. The summertime outreach normally consists of painting the exteriors of houses of low-income, elderly and disabled homeowners within Tacoma, Washington, city limits. 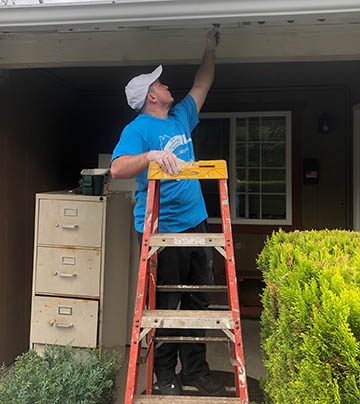 SIU Port Agent Warren Asp headed the union’s involvement this year, and he came away impressed by the attitude, effort and skills of the Seafarers team. Collectively, they spent three days (80 man-hours) at a local home, where they deftly gave it a facelift.

“We could not have asked for better crews this year,” the port agent said.

“The volunteers were a generational mixture of SIU veterans and rookies working side-by-side,” Asp said. “This was also an introduction to the program for our new Administrative Assistant Joni Bradley. Joni has had big shoes to fill in the port this year following Brenda Flesner’s retirement, and she was up for the challenge.”

Alberto Ortiz, a son of the homeowners, was the SIU’s main contact for the project.

“The SIU people did a very wonderful job,” Ortiz said. “The house really needed it, and I know my parents are very happy and grateful. Thank you very much, on behalf of all of us.”

Recertified Bosun Barnes has participated in Paint Tacoma several times. He said this year’s iteration was worthwhile, as usual.

“I enjoy giving back to Tacoma, putting the SIU’s name out there and showing we care,” Barnes stated. “The homeowners really appreciated our work.”

AB Lawson was a Paint Tacoma newcomer and was no less pleased with the group effort.

“I think it went really well,” Lawson said. “Everything was organized and we had lots of volunteers. You could tell that everybody was chipping in and having a good time. It’s a good program.”

GUDE Egaran has participated in prior years.

“I like to volunteer and help,” he said. “This was definitely worthwhile. At the end, I told Warren, ‘Maybe next summer we’ll do it again’”

Based on the SIU’s reliability, participation seems like a given, though not one that’s taken for granted.

Meanwhile, Asp noted that Egaran “was instrumental in stepping up and volunteering every day that we had a team working. From pressure washing to the final touches, he was our Johnny on the spot, so to speak.

“Also worth mentioning is our apprentice program graduate AB Morgan Hayes,” he continued. When we first got to the house, there were shrubs and tree branches that needed to be cleared so we could work. Brother Hayes had the proper tools in his truck to do a first-class pruning job of all interfering foliage.”

Asp also credited the homeowners for being “a delightful family that couldn’t have been more pleased to have their home getting a refreshed look. In sticking with the generational theme that seemed to be prevalent this year, the home comprised of grandparents to grandchildren spanning close to 70 years. The family brought out cold refreshments to make sure the team wasn’t overheating, showing their genuine delight with the job and wanting to show their appreciation.”

He reserved his highest praise for the Seafarers who turn out year after year.

“We always get members asking, ‘So, when are we painting a house this year?’” Asp said. “It has become a Tacoma staple, and it brings this hiring hall great joy to be involved with the community.

“Aside from generational diversity, we also get a cultural diversity of volunteers,” he concluded. “From our Muslim brothers to Filipino to African American, Tacoma gets it all from all walks of life. It speaks to a genuine desire for our membership to want to work side-by-side for the betterment of something that is bigger than themselves. We couldn’t be more thankful for our membership here.”