Mewbourne, a native of Ormond Beach, Florida, assumed command of MSC Aug. 25, 2016, overseeing the on-time logistics, strategic sealift and specialized missions that MSC conducts around the world, 24/7, 365 days a year. 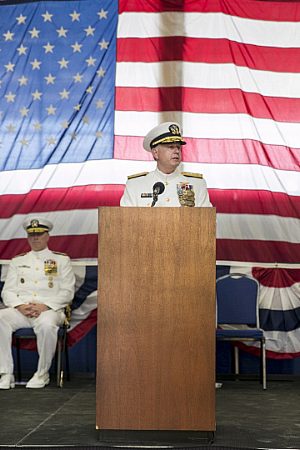 During his tenure, Mewbourne, and his staff devoted significant effort in developing and executing a plan to adapt to the changing operational environment and keep MSC ahead of competitors and potential adversaries. He focused on operationalizing MSC to align with changes to Fleet and Joint warfighting doctrine, and implemented programs and processes to assess the holistic readiness of our ships. Additionally, he identified capability and capacity gaps using wargaming and simulation and based on those results, provided our Mariners with realistic, relevant and challenging tactical training.

“At MSC we recognize the imperative to adapt to the exponential changes in the maritime environment and are boldly pursuing actions to gain and sustain competitive advantage and maintain relevance.” said Mewbourne.

A graduate of the Colorado State University and native of Alexandria, Virginia, Wettlaufer assumed command of MSC today following his latest tour of duty as the commander of Carrier Strike Group 3 in Bremerton, Washington.

“I am truly humbled to be here and to join this fantastic team,” said Wettlaufer. “Just coming off a dynamic, around the world (U.S. Navy) strike group deployment, my team was a prodigious consumer and demanding customer of logistics systems around the globe. As such, I understand and appreciate the challenges which MSC overcomes every day in order to provide the systems and synchronize global activities needed to deliver, distribute and sustain our warriors forward.”

Wettlaufer’s completed sea assignments include multiple deployments to the Mediterranean Sea, Indian Ocean and Arabian Gulf with Attack Squadron (VA) 85 and Carrier Air Wing (CVW) 1 flying the A-6 Intruder from the USS America (CV 66) including Operation Desert Storm. Forward deployed from Japan aboard USS Independence (CV 62) and USS Kitty Hawk (CV 63) as a Dambuster department head and CVW-5 operations officer, he flew the FA-18C Hornet and he deployed to the Pacific as executive officer aboard USS John C. Stennis.

Ashore, Wettlaufer was assigned to VA-42, VFA-106 for qualification training. He was an aircraft carrier scheduler for Commander, 2nd Fleet; served as a project officer, test pilot and landing signals officer with Strike Aircraft Test Directorate at Naval Air Station Patuxent River, Maryland; and was on a Royal Navy Exchange tour in the United Kingdom as an Empire Test Pilots’ School fixed wing tutor and experimental test pilot. He was selected as a Chief of Naval Operations Strategic Studies Group associate fellow (SSG XXI) and served in the Office of the Secretary of Defense as an analyst for the deputy assistant secretary of defense for European and NATO Policy.

Following the change of command ceremony, Mewbourne will serve as the Deputy Commander, U.S. Transportation Command, responsible for conducting globally integrated mobility operations, leading the broader Joint Deployment and Distribution Enterprise, and providing enabling capabilities in order to project and sustain the Joint Force in support of national objectives.