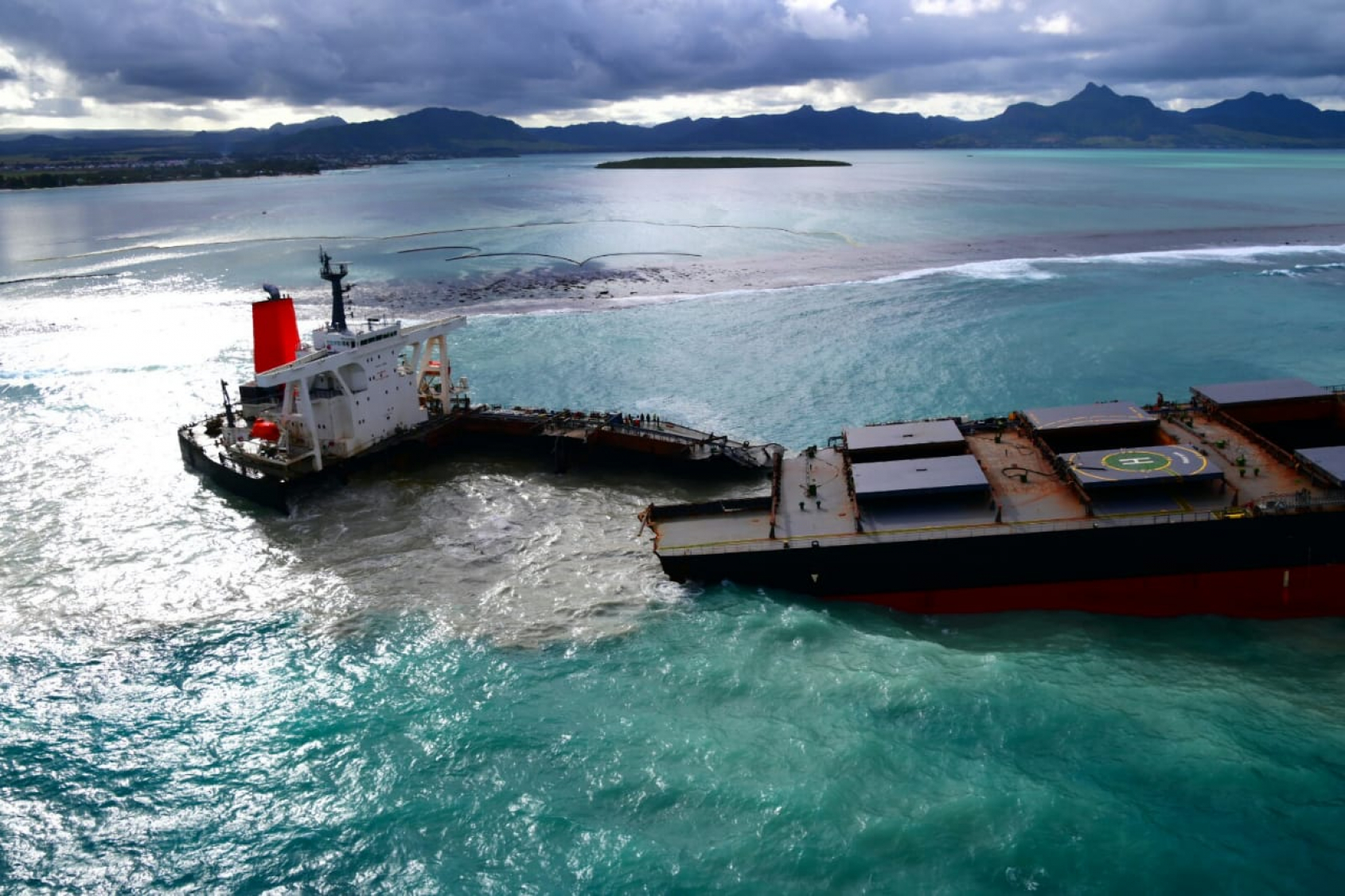 From the International Transport Workers’ Federation, to which the SIU is affiliated. David Heindel, extensively quoted in the article, serves as secretary-treasurer of the SIU in addition to his roles with the ITF.

The ITF is calling for the immediate release and repatriation of the MV Wakashio (IMO: 9337119) crew who have been held by Mauritian authorities now for over a year.

“This week marks the one-year anniversary of the grounding of the MV Wakashio and the environmental catastrophe associated with it. This week also marks one year since the Mauritian authorities have held members of the crew and prevented them from leaving the Republic; most have been effectively detained without charge,” said David Heindel, ITF Seafarers’ Section chair.

Heindel said the ITF and its affiliated seafarers’ unions have “deep concerns” about the treatment of the crew of the MV Wakashio by Mauritian authorities. He said the federation last week wrote to the President of the Republic of Mauritius, Mr. Prithvirajsing Roopun. In their letter, the ITF appealed for Mr Roopun’s support to see legal proceedings advanced and the expeditious conclusion of the now-year-long saga faced by the crew.

“The ITF supports thorough, independent investigations of the factors relating to any maritime incident, including those that may have affected the grounding of the MV Wakashio. In this instance, we are concerned about the lack of appropriate legal proceedings taking place regarding the Wakashio crew,” Heindel said. “While, in a particular context, criminal charges against seafarers may be justified, it is important that people have access to justice and are treated fairly. Access to justice and fair treatment by the authorities are fundamental human rights guaranteed by the Universal Declaration of Human Rights. We believe the treatment experienced by the crew of the Wakashio violates their human rights.”

Following the grounding of the MV Wakashio, Captain Sunil Kumar Nandeshwar and Chief Officer Tilakaratna Subodha were arrested by Mauritian authorities. On August 18, 2020 they were charged with endangering safe navigation. The pair have been detained in prison since their arrest and have been denied bail. Most of the remainder of the crew have been detained under “house arrest” and kept in a local hotel, seemingly on the grounds that they may be required to appear as witnesses in a trial that has yet to commence.

In the ITF’s letter, Heindel and ITF General Secretary Stephen Cotton appealed to Mauritian authorities to consider the human cost that delayed proceedings and unnecessary detention would have on the crew and their families:

“At present, the majority of the Wakashio crew in the care of your courts have not been charged with any offense, yet they are still not free to leave Mauritius. As a consequence, some of these seafarers have not seen their families for more than two years. This is because, prior to the maritime accident in July last year, some of the crew had already been on board the vessel in excess of 12 months – beyond the legal limit set by the Maritime Labor Convention (2006, as amended).

“Two years is too long to be away from loved ones. The crew’s ongoing detention adds to the stress of their families many of whom are battling the present pandemic and its economic effects, without the support and presence of their fathers, husbands, brothers, and sons. The families want them to come home.

“We ask that you do all that is within your power and influence to bring this saga to an expeditious conclusion, for the sake of the seafarers – and for the Republic’s reputation of as an upholder of human rights.”

Criminalization of seafarers is on the rise

Heindel said that while the Wakashio accident was “deeply unfortunate,” with the ITF sharing concerns about the impact of the accident on the ocean environment, the federation could not “stand by and allow what appears to be an example of criminalization of seafarers”.

“Criminalization of seafarers is on the rise. Whether it is felt by the crew of the Wakashio who were effectively detained without charge, or the drawn-out threat of criminal charges against the Ever Given crew to bolster the Suez Canal Authority’s negotiating position over damages, seafarers are being cynically targeted all over the world by officials just for doing our jobs,” said Heindel. “We know that seafarers are seen by some officials as convenient bargaining chips in efforts to hold shipowners to account for maritime accidents caused by issues like a lack of maintenance. This is especially the case when a state finds it difficult to locate and prosecute irresponsible shipowners who too often hide behind the Flag of Convenience system. But the solution to irresponsible shipowners ducking accountability for maritime accidents is not to hold seafarers hostage, but rather to reform the Flag of Convenience system and abolish the secrecy protections which allow anonymity and evasion.”

Heindel said seafarers were also a target for local officials who wanted to look effective against drug trafficking.

In a case just this month, Turkish law enforcement officers found 176 kilograms of cocaine hidden across 161 packages inside a container aboard the MSC CAPUCINE R (IMO: 9210086). The authorities arrested the master of the vessel and three deck officers at Iskenderun, Turkey and continue to hold them.

Heindel said the ITF and shipping giant MSC were very concerned about the arrest, without evidence, of the crew of the MSC CAPUCINE R.

“The arrest of the four crew in Iskenderun, Turkey is just the latest example of where seafarers are criminalized and treated poorly when there exists no evidence at all that they were involved in the alleged crimes. Once again, it seems authorities have decided to pin the smuggling offense on innocent seafarers,” said Heindel.

He said that unless there are hazardous materials within containers, crew typically have no knowledge of what is inside them. Containers are sealed before being loaded onto a vessel.

“We will be working with MSC and our partners and affiliates in the region to see the release of the crew. As it stands there is not a shred of evidence that justifies the suspension of their rights and liberty,” said Heindel.

In a similar case, in July 2019 the crew of the U.S.-flagged bulk carrier UBC SAVANNAH (IMO: 9220976) were arrested in Mexico and held without charge nor trial in poor conditions, when 225 kilograms of cocaine was found in the vessel’s cargo hold dispersed across 227 packages.

While most the crew were released shortly after their arrest in 2019, Polish captain Andrzej Lasota was held until March 2021. Mexican authorities claimed that he had been negligent in “failing to be aware that the ship he commanded may have been carrying prohibitive substances,” whereas in fact as soon as the packages were found Captain Lasota ordered an immediate halt to all cargo operations and notified relevant authorities.

“These high-profile cases are just the tip of the iceberg that the world gets a glimpse of through the press,” said Heindel.

“Every day, seafarers face unfair prosecutions and detentions all over the world. They are being denied justice through a lack of impartial trials, poor or non-existent access to legal representation and translation services, and – in some jurisdictions – enormous financial barriers prevent seafarers from accessing their rights to bail and appeal,” he said.

But seafarers’ unions are pushing back against criminalization

Heindel praised the work of ITF affiliates supporting seafarers detained abroad, and those seafarers’ unions who were campaigning against creeping criminalization by governments towards seafarers in the law.

In July, the Maritime Union of India (MUI) launched the ‘Service to Stranded Seafarers’ project, developing a database of Indian seafarers being detained overseas.

Heindel also said the ITF opposed amendments to immigration laws put forward by the United Kingdom government which would criminalize seafarers for assisting people facing drowning and danger at sea.

The British government’s changes would prevent seafarers from complying with our obligations under international maritime law, including the International Convention of Safety of Life at Sea, or SOLAS.

“We support the serious concerns being raised by our UK affiliates, Nautilus International and the RMT, about the catch-22 position these changes put British seafarers in. Under this new law, if seafarers save a person seeking asylum from drowning, they face life imprisonment. If they let them drown, then they could face prosecution in every country that has ratified these conventions in addition to carrying the lifelong emotional burden of knowing they could have saved a life, but did not,” said Heindel.

“In coming years, the world will likely see a rise in the number of persons seeking refuge from the effects of climate change, including those people fleeing fires, floods, rising sea levels and drought-induced famine. Now is not the time to be criminalizing seafarers for saving lives,” he added.

Heindel said the ITF would continue to campaign on criminalization and update resources it had produced for seafarers and their unions in recent years.